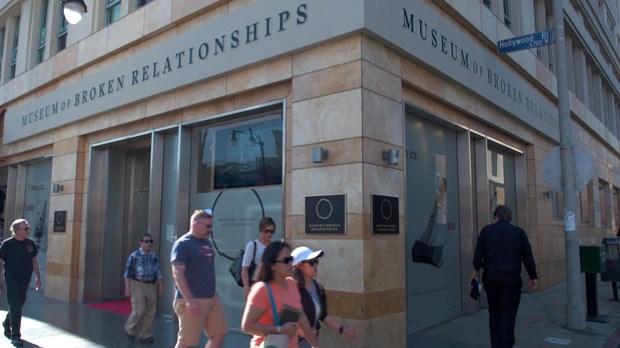 (CBSNews) In Hollywood, heartbreak has always been easy to find.

And now, it has an address: 6751 Hollywood Boulevard in Los Angeles, home of the Museum of Broken Relationships.

Think of it as emotion under glass: a hundred or so ordinary objects that mean absolutely nothing to you and me -- and EVERYTHING to the people who gave them up.

Love notes ... the blue silk blouse a woman wore the day her husband left her ... the wedding cake toppers someone kept after their marriage fizzled ... a dried-out prom corsage from a long-lost love ... the butterfly wings a guy made for his fiancee's Halloween costume before she cheated on him and fluttered away.

Smith said, "I don't know about you, but when I was spectacularly dumped by my college boyfriend, the last thing I wanted to do was to save a little something to remember that moment by."

But a lot of people do. Take the woman who was divorced but couldn't bear to throw away her silk floral wedding dress, so she kept it -- and crammed it in a pickle jar (left).

The man behind all this is L.A. attorney John Quinn, who discovered the original museum in Zagreb, Croatia, a little over a year ago -- a place with its own collection of relationship rubble.

"We all came out of it thinking, 'That was extraordinary,'" he told Smith. "It was very thought-provoking, very moving in a way. And I thought more people should see this."

And now they can, at eighteen dollars a head. Among the items on display: the cheerleader outfit one woman bought because her ex was a Nebraska fan ... and the silicone implants another had removed after she dumped the guy who talked her into getting them.

It can all be a little sad, but the people Smith met seemed to be taking it remarkably well.

"It's amazing, I love it," said one visitor from London. "It's wonderfully cathartic to see people shedding the memories of their breakup and moving on and letting go and allowing other people to share in what happened."

Alexis Hyde, the museum's director, says one can find beauty in a breakup: "I think so. Hopefully, you know, you can look back and think fondly and know that even if it didn't work out, it contributed to who you are today. And we're all failing together and we're all trying to get back up together. And that, I think, is very beautiful."

One couple was surveying the surveying the exhibits: "We were just reading one that might be one of his ex-girlfriends!" the woman said.

"This is a little embarrassing, because I've seen three things that describe my last three relationships to a tee," he added.

That's a common reaction: the museum already has enough material to change the displays every few months. But, like love itself, there's always room for more. "So this is very weird for us, 'cause we hope we don't end up in here," one woman said.

"But we easily could," her partner said.