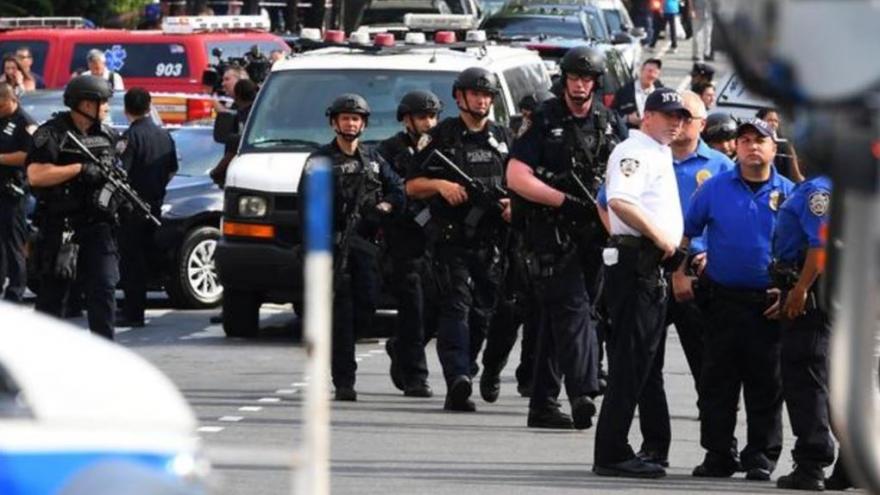 (AP) — A doctor with a rifle hidden under a lab coat opened fire Friday at the Bronx hospital where he used to work, killing one person and wounding six others before taking his own life, authorities said.

The shooting started at 2:50 p.m. inside the Bronx Lebanon Hospital, drawing a heavy police presence to the area as officers with guns drawn told people to hide. Hospital employees barricaded themselves in rooms to escape the violence.

"I thought I was going to die," said Renaldo Del Villar, a 55-year-old patient who was in the third-floor emergency room getting treatment for a lower back injury.

He said an alarm went off, and police said there was an active shooter in the hospital. Someone on the loudspeaker also announced a "Code Silver."

Police officers went floor by floor looking for the gunman and reported just before 4 p.m. that he was dead inside the building. A law enforcement official told The Associated Press that the gunman killed himself. He had opened fire on the 16th and 17th floors, police said.

Law enforcement officials identified the shooter as Dr. Henry Bello, who was described on the hospital website as a family medicine physician. It was not immediately clear why Bello was no longer working at the hospital. The officials were not authorized to discuss the still-unfolding investigation and spoke on condition of anonymity.

The FBI tweeted that they had found "no nexus to terrorism" so far.

Emergency crews were blocked from entering the hospital while the shooter was at large.

Garry Trimble said his wife, hospital employee Denise Brown, called him from inside the hospital shortly after 3 p.m.

"She woke me up and told me there was a situation, somebody's out there shooting people," Trimble said as he waited for his wife to come out. "I could hear in her voice she was shaking and about to cry."

Gonzalo Carazo described the scary scene to WCBS-TV. "I saw one of the doctors and he had a gunshot wound to his hand," Carazo said.

"All I heard was a doctor saying, "Help, help!" Carazo locked himself in a room for about 15 minutes until police came and led him out of the hospital.

The 120-year-old hospital has nearly 1,000 beds and one of the busiest emergency rooms in New York City. It is about a mile and a half north of Yankee Stadium.

In 2011, two people were shot at Bronx Lebanon in what police said was a gang-related attack.