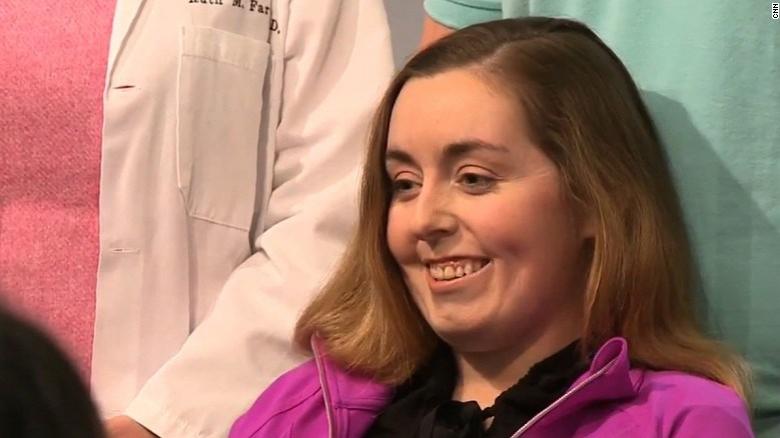 (CNN)A 26-year-old mother of three adopted children is the first uterus transplant patient in the United States. Lindsey, who is only revealing her first name, received a uterus from an unidentified deceased donor on February 24 at the Cleveland Clinic.

"I was 16 and was told I would never have children and from that moment on, I've prayed that God would allow me that opportunity to experience pregnancy. And here we are today at the beginning of that journey," Lindsey said while sitting in a wheelchair with her husband, Blake, standing behind her.

They are parents to "three beautiful little boys" whom they adopted through the foster system, she said. She expressed gratitude to the family of the donor and to the medical team that performed the surgery, which took more than nine hours, and is caring for her.

"We anticipate she'll be here for a month or two ... then she should be able to have a normal life," said Dr. Andreas Tzakis, director of the Cleveland Clinic transplant program and the lead investigator of the uterus transplant clinical trial there.

Lindsey's normal life will include taking anti-rejection medication and returning to Cleveland for monthly checkups until she is ready to become pregnant.

"Uterus transplant is not just about a surgery and for moving a uterus from here to there. It's about having a healthy baby, and that goal is still a couple of years away," Cleveland Clinic Ob-Gyn surgeon Dr. Rebecca Flyckt said.

Lindsey has uterine factor infertility; she was born without a uterus but has normal ovaries that produce healthy eggs. She is not alone, according to Dr. Tommaso Falcone, chairman of the Cleveland Clinic's transplant center and an Ob-Gyn surgeon. One in 5,000 women are born without uteruses. But not all of the women selected for the trial have this condition. Some have a uterus that is not working properly or that has been removed.

Prior to receiving the uterus, Lindsey underwent in vitro fertilization so she and Blake could bank about six to 10 embryos. Doctors will wait at least a year before they consider transferring one of those embryos into Lindsey's transplanted uterus. The wait will allow her doctors to reduce the amount of anti-rejection medication she is taking. Only one embryo will be transferred at a time.

Flyckt said each patient in the trial can have one to two babies, to be delivered by cesarean section, and then the uterus will be removed, so the patient doesn't have to keep taking anti-rejection drugs.

Uterus transplant recipients cannot become pregnant spontaneously, Falcone explained. That's because the fallopian tubes, which carry the eggs from the ovaries to the uterus, are not transplanted.

Doctors in Sweden have performed the experimental procedure using living donors, in some cases relatives, in nine women since 2012. There have been five successful live births.

Dr. Ruth Farrell, a bioethicist at the Cleveland Clinic, said the team is limiting the clinical trial to deceased donors to minimize the risks associated with the process, citing some complications among living donors. Falcone added that the doctors are looking at ways to minimize donor risks and could possibly turn to living donors in the future.

Doctors said Lindsey's donor was a healthy woman in her 30s. Falcone said the process of screening the donor and the donor organ is no different than for other organs, such as the heart or liver.