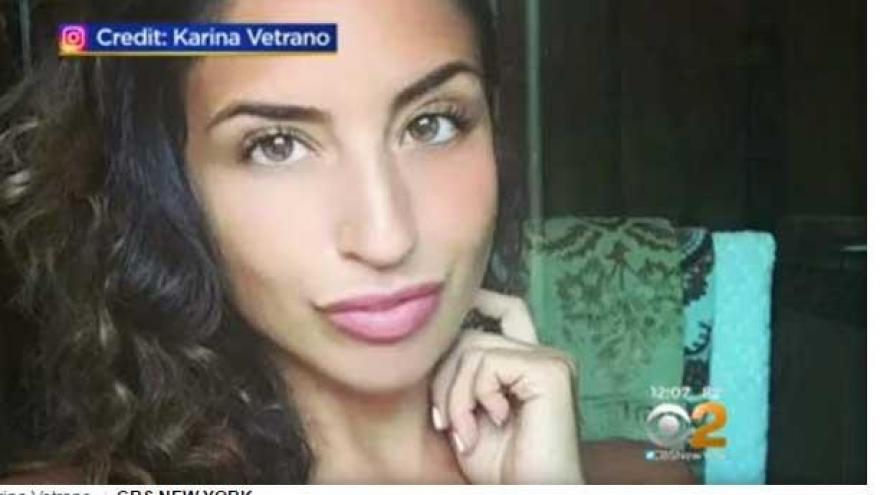 NEW YORK (CBS NEWS) -- The family of a slain New York City jogger was emotional as they left court over the weekend, where they first encountered the man accused of killing their daughter.

Karina Vetrano was killed Aug. 2, 2016 after she went out for a run near her Queens home. Police on Saturday arrested 20-year-old Chanel Lewis, saying a suspicious person report led them to develop him as a suspect before DNA linked him to the crime.

Lewis was arraigned Sunday and ordered held without bail Monday. At Sunday’s court hearing, Vetrano’s mother Cathy was clearly distraught as she sat in court and looked at the suspect, reports CBS New York. More than a dozen of the victim’s family members attended the hearing, the station reports.

As Lewis was led out of the courtroom, she yelled, “Savage murderer! He murdered my daughter – my beautiful, innocent daughter!”

Karina Vetrano’s body was found amid the weeds in a marshy park not far from her Queens home. She had been strangled.

The closely watched case caused fear among women who run alone and baffled investigators, who for months were unable to find anyone who matched the probable suspect’s DNA that was found under the victim’s fingernails as she fought back. The DNA was also found on her neck and phone.

New York Police Department Chief of Detectives Robert Boyce said the break came after police went back through older 911 calls and found one reporting a suspicious person in the area near the attack. The call was placed in May, three months before the attack, the station reports.

Investigators interviewed Lewis on Thursday and obtained a DNA sample from him, which Boyce said was tested and linked to DNA found at the scene and on the victim.

“Karina helped us identify this person,” Boyce said. “She had the DNA under her nails. She had touch DNA on her back and there was more DNA on her cellphone. So three incidents. That’s how we were able to bring this profile up. And that’s how we made the link.”

The detective said that after Lewis was arrested at the home he shares with his mother on Saturday night, he gave incriminating statements on “each step of the assault.”  Assistant District Attorney Michael Curtis said that in a videotaped confession, Lewis admitted to beating Vetrano in the face and head, strangling her, and leaving her body in the weeds.

Asked for more information about Lewis, Boyce declined to comment on the suspect’s mental state or social behavior.

Boyce said the encounter that led to Vetrano’s death apparently was a chance one, and authorities didn’t believe she and Lewis knew each other. Lewis has no prior arrests, but had three summonses on record, police said.

“I’m not gonna say it’s a good day, but we can move forward now,” the victim’s father, Phil Vetrano, a retired New York City firefighter, told reporters. “We are at a place we were never at. We know who did this.”

Cathy Vetrano told reporters there is “no happiness” for her family, but thanked the NYPD and her community.

“We would stop at nothing to find the savage that did this to her. We know who he is,” Cathy Vetrano said. “He’s a savage, and I’m glad that he’s off the street so he doesn’t kill anyone else’s daughter.”

Lewis faces a possible prison sentence of 25 years to life if convicted.

“The demon will get his justice. We will see to it,” Cathy Vetrano said.

Speaking to reporters outside court, Lewis’ father, Richard Lewis, said his son is a good person and he doesn’t think he would be capable of committing the crime.