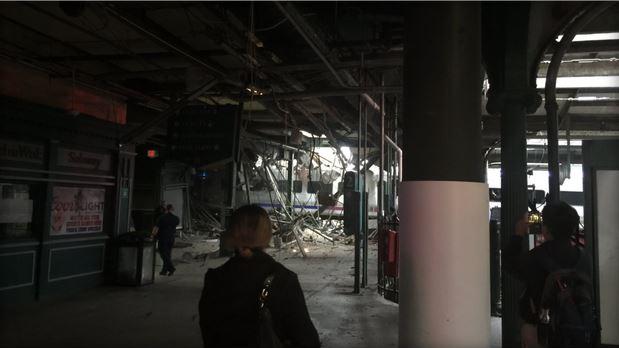 A passenger, Leon Offengenden, said he was in one of the sections behind the lead car when the crash happened.

"The front car is essentially off the rails ... into the building of the station, with the roof sort of collapsed around it," he said.

"The lights went out and a few people screamed (when the crash happened)," he said.

Once outside the train, "a man walked past me holding his arm. I saw some blood."

The extent of the injuries weren't immediately known, an emergency responder monitoring the situation said. An urban search-and-rescue team has been deployed and will assist in shoring up the structure and helping to remove people from the train, the source said.

CNN producer Paul Murphy described a chaotic scene, with the arrival of first-responders from various New Jersey agencies, sirens blaring and nearby streets cordoned off.

"The main sound you hear now are sirens -- sirens everywhere."

"There's only one option for people who don't have a car to get out of Hoboken right now, and that's the bus," Murphy said. "The bus lines are very, very long and many people are on the phones with work, saying, 'I'm not coming into work today or I'm going to work from home.'"