Mom carrying child through surrogacy gets pregnant with her own child 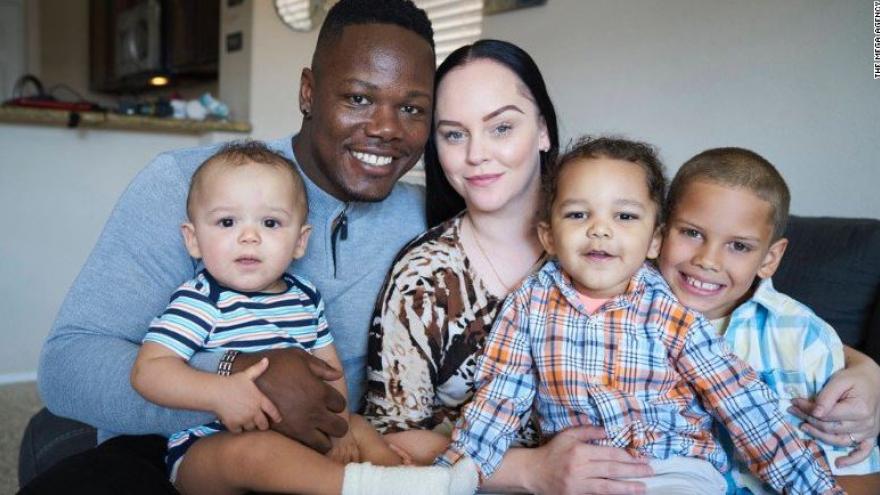 (CNN) The lives of Jessica Allen and her husband, Wardell Jasper, were changed permanently and for the better by a rare medical phenomenon. Their unique story begins with the hope of extending a lifeline to another couple around the globe.

Allen, 31, a California mom with two growing boys, decided to become a surrogate mother and carry the baby of another couple, she told the New York Post. Although the $30,000 paycheck (plus expenses) would benefit her family, she also yearned to share the joy she knew by helping a woman who struggled to give birth.

"No woman in the world should have to live their life without experiencing the love and the bond from a mother and a child," she told ABC News.

Working with a San Diego-based surrogacy agency, Omega Family Global, Allen was matched with a couple from China, where the use of surrogates is illegal.

In April 2016, a single male embryo from the couple was implanted in Allen's uterus at an Irvine-based in vitro fertilization center. Nine days later, blood tests confirmed the pregnancy.

Unexpected news arrived six weeks later during her checkup; while examining her, her doctor said, "Well, I definitely see that there is another baby," she told ABC News.

Allen said her doctor explained to her that "the chance of an embryo splitting is very small, but it does happen," and this split meant the second baby was an identical twin of the first. Allen felt surprised but also happy for the Chinese couple.

A bonus was that her payment was increased by $5,000 for the second child.

At 38 weeks' gestation, on December 12, 2016, Allen delivered what she believed to be identical twin boys via cesarean section at Riverside Community Hospital, she told the New York Post. Though she never saw the babies herself, she was shown a photo.

"I did notice one was much lighter than the other -- you know, obviously," she told ABC News. "They were not identical twins."

A month later, there was some shocking news. A DNA test confirmed that the second baby was not a twin to the implanted embryo -- but actually Allen and her husband's biological son.

"I don't know how to describe it. We were floored. We were like, how did this happen?" she told ABC News.

Omega Family Global's lawyer, Matthew Faust, said the agency is unable to address any particular facts of this story.

CNN has not been able to reach the California couple.

An unusual occurrence of superfetation might explain what happened, but one expert believes it may be more complicated than that.

"Superfetation is generally defined as becoming pregnant while the mother is already pregnant," David Haig, a professor of biology at Harvard University who was not involved in the surrogacy, wrote in an email. However, he added, "the surrogacy means that it doesn't fit neatly into the classical definition of superfetation."

Superfetation is sometimes suspected when twins, at birth, are very different sizes and so apparently different ages.

In such cases, Haig said, the mother is believed to have conceived a second time during an ongoing pregnancy.

"I can remember reading about an old case where the twins were delivered at different times," Haig said. "The mother came to the doctor with abdominal pains. He said you are in labor. She said, I cannot be -- I delivered a month ago."

Despite her protests, the twice-pregnant woman delivered a second child one month after the first, Haig said.

Another phenomenon, heteropaternity, occurs "when a woman produces twins with different fathers," he said. Sometimes, this has been called superfecundation.

In such cases, a woman would have had intercourse with two men, presumably at different times, Haig explained. "But then two eggs are fertilized by the mixed sperm within her reproductive tract," he added.

"This case is a bit of the mix of the two situations. I did not see a suggestion that the 'twins' were different gestational ages but they were conceived by different men and had different mothers as well."

Allen told the Post that she and her husband "did not have sexual intercourse until we were given permission by the IVF doctor, who recommended the use of condoms."

The rare phenomenon she experienced, then, may have also included another infrequent occurrence: a condom fail.

Both superfetation and heteropaternity are rare phenomena, according to Haig.

Part of the family

After confusion and some difficulty in getting her baby returned to her, Allen and Jasper were reunited with their son in February. Allen told ABC News that her son, renamed Malachi and now 10 months old, is part of their family.

"We didn't plan this," Jasper told ABC News. "It's an emotional situation."

Surprise, though, does not diminish the family's joy.

"He's just so smart, so intelligent, you know," Allen told ABC News. "He's learning fast. He's got two big brothers to run after and learn from."