Snow moving across the area 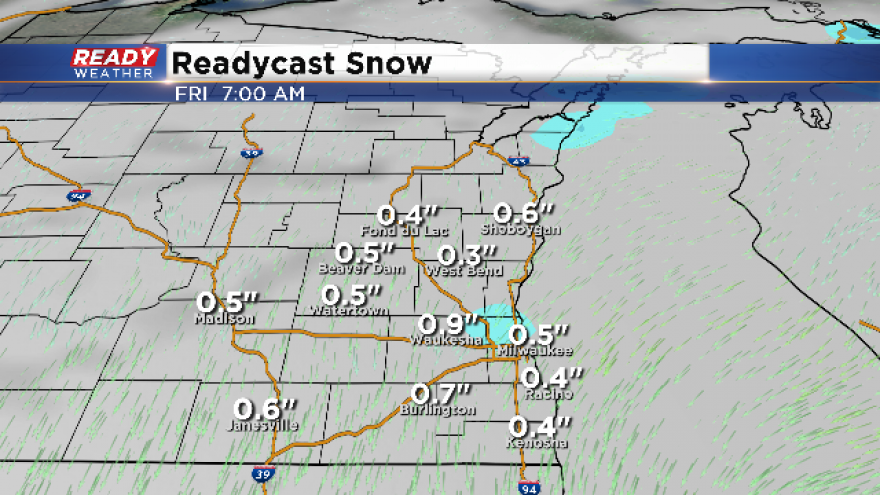 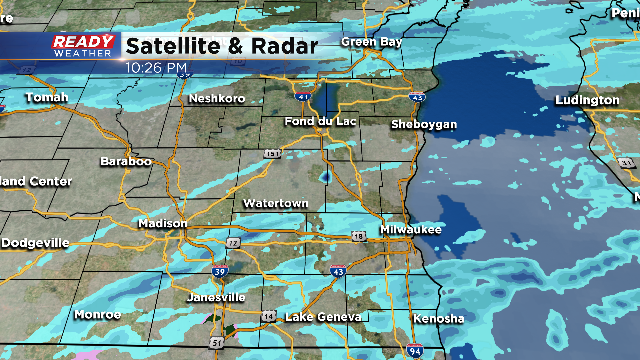 Scattered snow showers have finally moved into the area.  They will continue through 2 or 3 am, with accumulation around a half an inch.  Some isolated slick spots are possible, but we aren't expecting major accumulation to totally cover roads.

Look for some flurries for Friday morning; otherwise, high will climb into the middle 30s under a mostly cloudy sky. 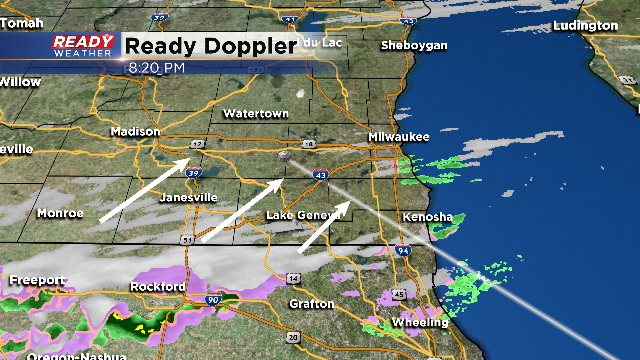 The atmosphere is starting to saturate.  There's been a lot of dry air that's holding the precipitation back.  Now that the dry air is being overcome, snow will develop between now and Midnight

This snow will be light to moderate and could amount to a half an inch or a little more.  This is not a big event; however, even a little snow can cause slick spots and accidents, so please use caution.

The snow should be out after 3 or 4 am, so the morning commute shouldn't be impacted. 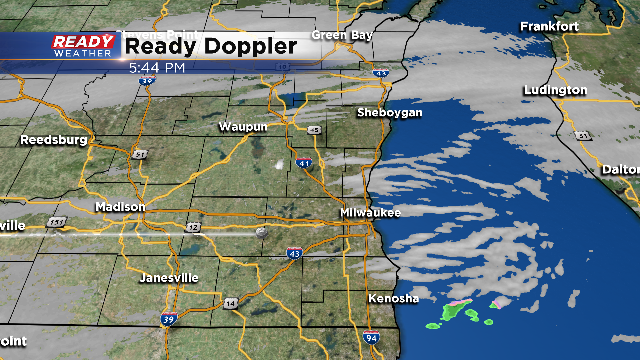 Light snow and flurries have been reported across the metro this early evening.  Light to moderate snow will continue to fill in between 7 pm and Midnight.

0.5" to 1.0" is expected across the viewing area heading into Friday morning.  As temperatures drop some this evening, the light snow could create some slick spots, but overall travel in our area should be ok.

Central and northern Wisconsin will pick up 1" to 3", so travel might be a little trickier the further north you go tonight. 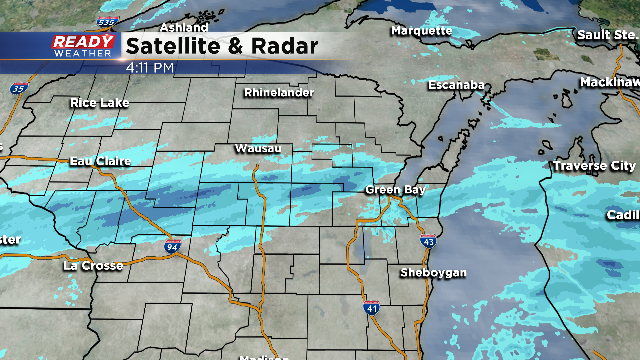 A distinct band of snow remains well to the north of our area this afternoon.  While central Wisconsin will experience the snow, our snow for the Milwaukee metro will arrive later this evening between 6 PM and Midnight.  A light mix of some drizzle or flurries remain possible this evening before the snow.

There are no changes in the overall accumulation thinking. We still expect 0.5" to 1.0" of snow tonight into early Friday morning.  Originally it looked like 1" to 2" for Fond du Lac and Sheboygan counties; however, with the band setting up further north, they might not pick up more than rest of the area. 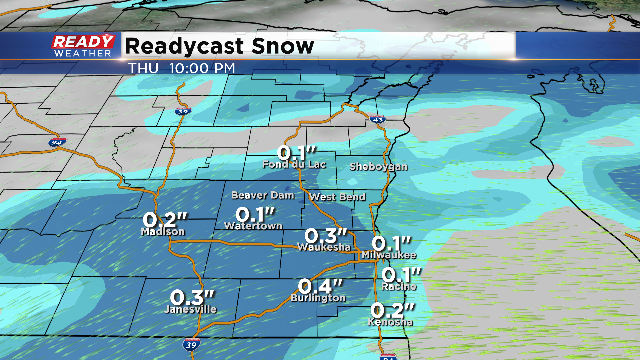 No changes in the thinking with the going forecast.  A band of snow this afternoon and early evening with setup across Sheboygan and Fond du Lac counties.  Additional snow for the rest of the area will move from west to east between 6 PM and Midnight.

Snow showers this evening into the overnight with likely produce up to 1" of snow throughout the Milwaukee metro.  Slightly higher totals are possible on the northern part of our viewing area.

Slick roads are possible later this evening and overnight, so please use caution.  Lingering snow showers Friday morning should wrap up before Noon.

Light snow is still expected to arrive later this evening. The latest weather models have a little bit of a later arrival time so the majority of the evening commute will be fine. The best chance for slick spots during the commute will be north in Fond du Lac and Sheboygan Counties. 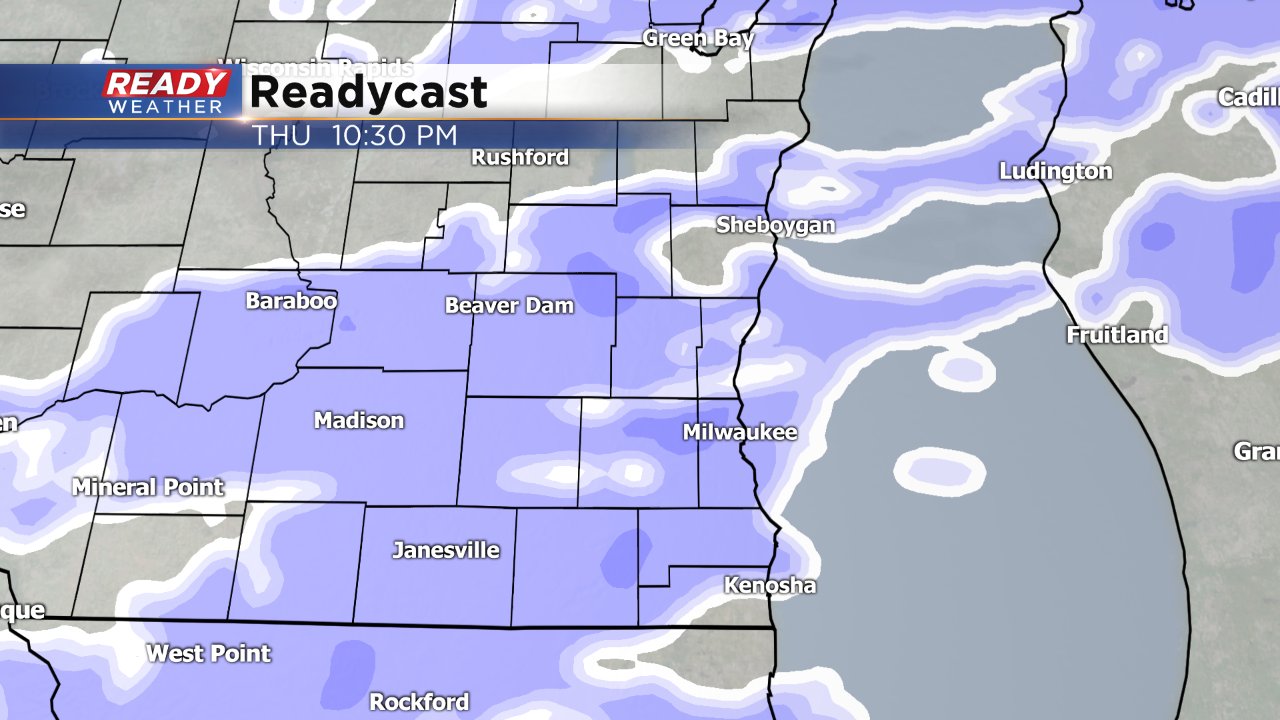 The biggest question in the forecast is what type of a wintry mix will fall if any. The latest thinking is that most of this just stays as light snow but some rain is possible. If we do see any rain or drizzle watch for icy patches tonight as surface temperatures dip below-freezing, especially north and inland. Up to 1" will fall for most of southeast Wisconsin with up to 2" possible in northern spots. 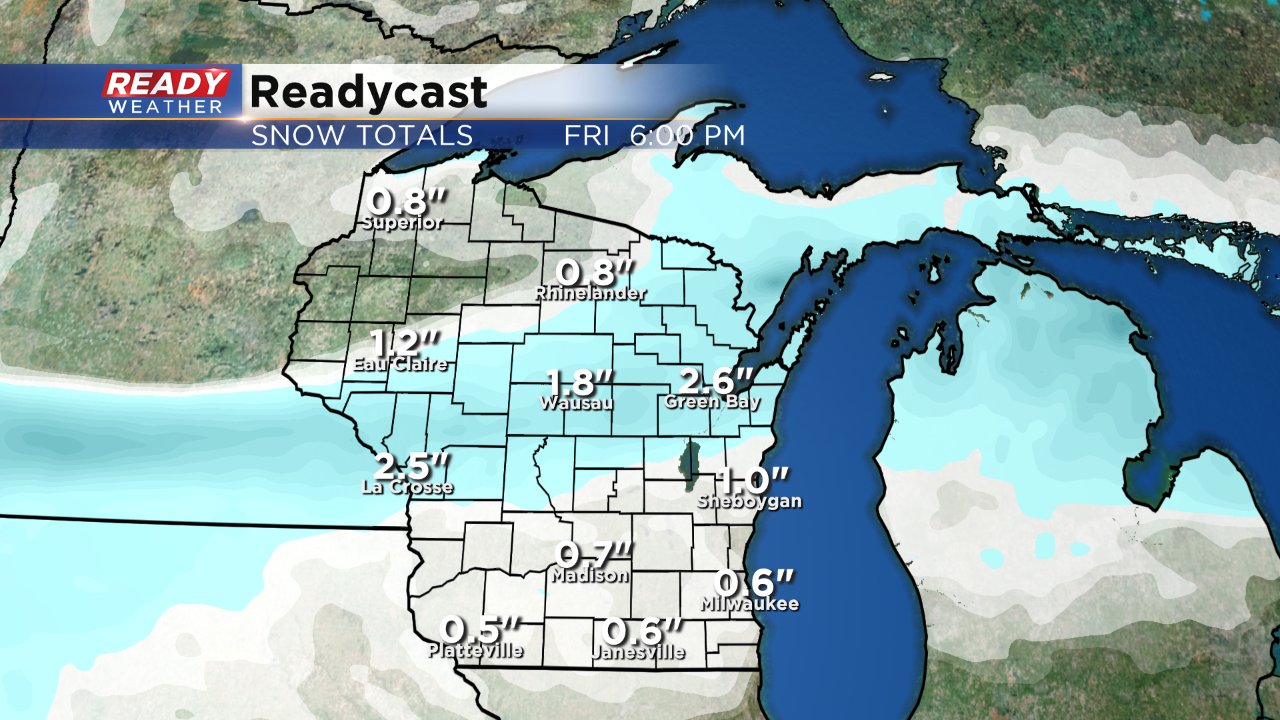 If you are traveling north into Central Wisconsin, expect a little more snow with 2-4" possible from Green Bay to La Crosse.

A light wintry mix will develop in parts of the area today. The far northern parts of the viewing area could see light snow by late this morning, while the rest of the region will see a wintry mix move in by this afternoon and evening. The snowfall totals have scaled back since the trends have been a weaker storm and less moisture to work with. Most spots south of I-94 will see an inch or less or snow, with a wintry mix at times. 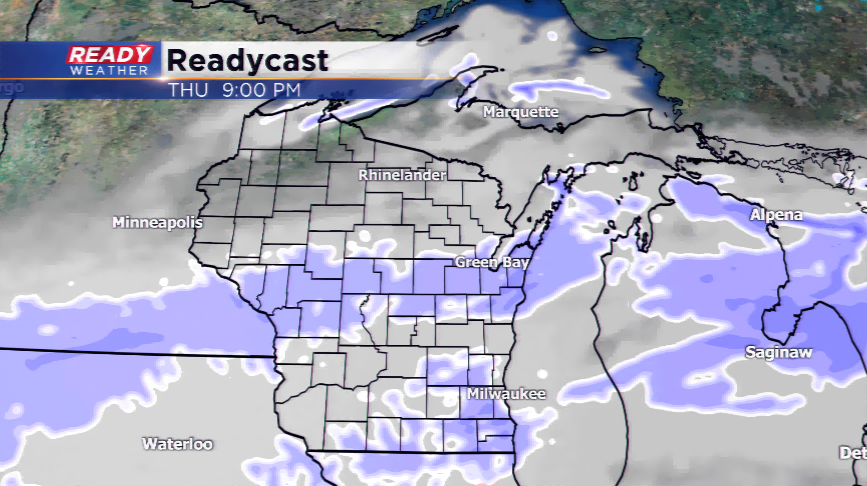 The farther north you look in our TV market, the better chance of accumulating snow. 1”-3” of snow is possible in Fond du Lac and Sheboygan County.

The activity will taper off by Friday morning, but the roads will still cause problems with hazardous driving until all the work is done on the roads. Another batch of snow is possible on Christmas Eve and early Christmas, and then all eyes are on the cold.

The Arctic blast will push the coldest air of the season into southeastern Wisconsin and most of the Midwest/Great Lakes region. Highs drop 15-25 degrees below average with overnight lows dropping below zero in some locations in the area. The timeframe that looks to be the coldest will be around Christmas. Make sure you have all your maintenance done on your house and car, and please take care of your pets. 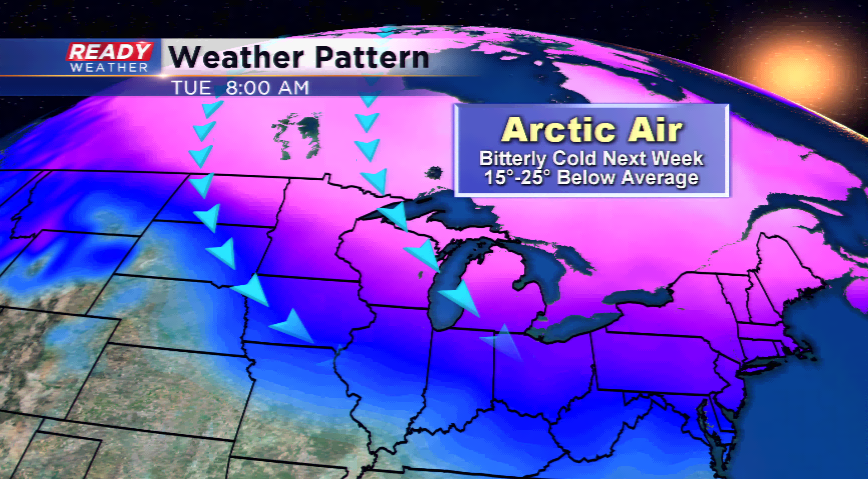 For the very latest on these changing weather conditions, make sure to download the free CBS58 Ready Weather App. The app is available both on Android and Apple. 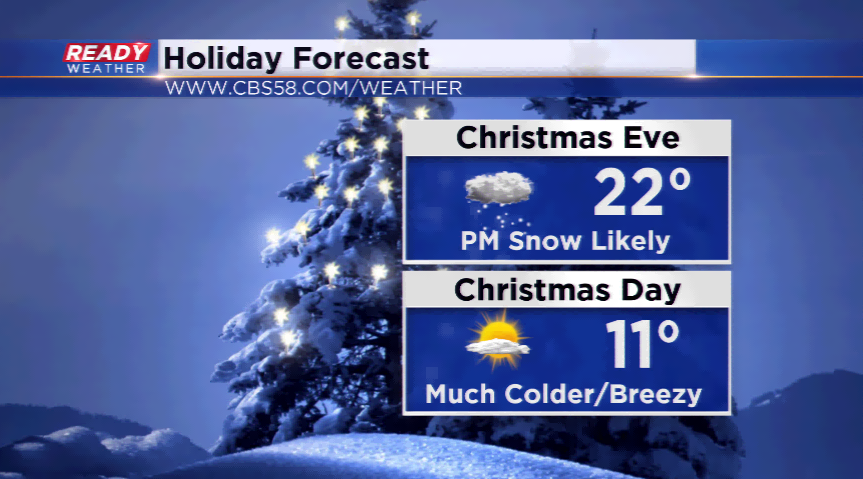