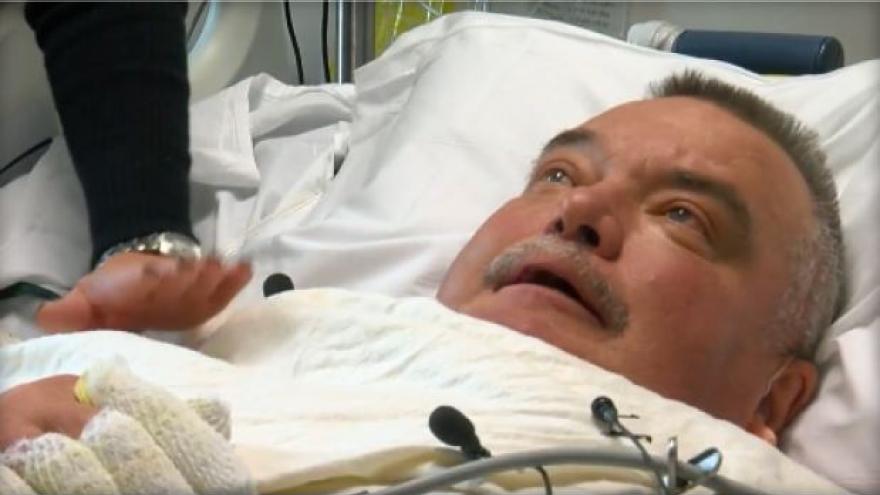 MINNEAPOLIS -- A missing hunter who walked and crawled to safety in subzero temperatures is sharing his story of survival. "I kept saying, 'I can't fall. If I fall I'm going to be in a bind,'" said 72-year-old Dave Quiser.

The retired sheriff's deputy decided to go grouse hunting on Christmas Day north of his home. His truck got stuck on a back road and his family didn't know where he was.

Quiser did not have a cellphone on him.

"I found myself in, as deputy sheriffs would say, 'deep doo-doo,'" Quiser said.

He spent the night in his truck as the thermometer dropped to minus 30 degrees.

That night was also hard for his family. When Dana Sanders couldn't get a hold of her dad, she called police. Search crews worked through the night.

"It was the most helpless feeling ever, not being able to find him and wondering, 'What's going on in his mind? You know, he's got to be scared. Is he hurt?'" Sanders said.

The next day, Quiser realized he might have to walk to a main road three miles away to have a chance of being found. He grabbed his walking stick and started out.

"I have emphysema and the farthest I've been able to walk is one mile," he said. "I've got a father and a brother, both deceased. I called upon them both for strength."

Quiser fell about two miles into his walk, so he crawled instead.

Bitter, burning cold and ice ripped his pants through the knees.

"What kept him going was that he was one step closer to his family and he wasn't going to die," Sanders said.

Then, with little energy left, a real-life Christmas miracle happened.

"Lo and behold, a truck pulled up alongside of me, and the guy asked me if I'm alright. I said, 'Hell no I'm not all right [laughs]!'" Quiser said. "They saved my bacon, without a doubt."

A father and son, checking on logging equipment, just happened to see Quiser. They took him to an area hospital. He was then flown to Regions Hospital in St. Paul, where he is being treated for hypothermia.

Quiser's family knows this could have ended much differently.

"Seeing every day his skin get warmer and his hands getting some color back to them, it's been really special I think to be there with him," said granddaughter Anjelica Avelsgard.

Frostbite will take some of Quiser's fingers, but it won't take his spirit –- or his sense of humor.

"I guess I'll be typing with my elbow now," Quiser said. "Let your family know where you're going, and never give up. Never, ever give up."

Quiser's family wants to thank everyone who searched for him that night and helped him after he was found. They especially want to thank Sheldon and Preston Sokolski, the father and son who found him on the road.