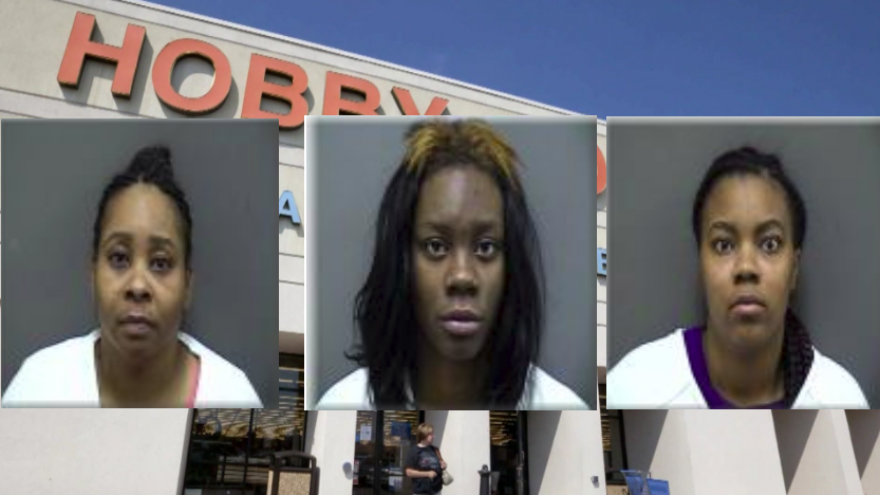 RACINE, Wis. (CBS 58) -- Three women have been arrested and are now facing charges after attempting to steal carts full of merchandise from a Racine Hobby Lobby.

According to the criminal complaint, Amber Ellis, Tamyra Ellis, and Octaviona Johnson from Milwaukee are facing charges of Felony Retail Theft.

On Wednesday, officers responded to the Hobby Lobby located at 2406 South Green Bay Road for a report of a retail theft by three female suspects.

The Hobby Lobby store manager told police that the three women and one small boy entered Hobby Lobby and loaded up two carts full of merchandise. The manager then said that one of the females exited the store while the other two suspects proceeded to pass the last point of sale with the shopping carts without paying for the merchandise.

Police determined that a total of 41 items were taken from Hobby Lobby without consent, with a total value of $1,209.

An additional Hobby Lobby employee said she confronted one suspect about the merchandise and tried to take them back into the store, but the suspect allegedly shoved her, grabbed the cart, and sped away in a vehicle with the trunk open.

Officers later located the vehicle on I-94 and conducted a traffic stop where the three women were taken into custody. Police said that the stolen Hobby Lobby merchandise was in plain view.

All three women admitted to taking part in the Hobby Lobby theft.