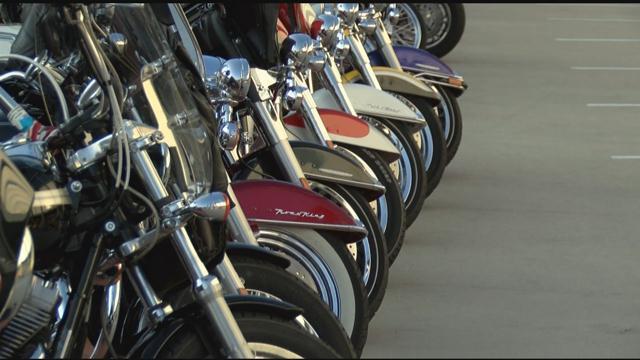 MILWAUKEE, Wis. (Sept. 3, 2015) -- It is all things Harley this weekend in Milwaukee. The 15th annual Milwaukee Rally is underway, which began with a massive event at the Harley-Davidson museum. Harley-Davidson's were lined up along the museum's front drive, Friday, each one custom made to the owner's specs and personality. If you ask Lynette Patterson, she might tell you she has 11 finger prints. The ten on her hands, and the 11th being her Harley.

\"I just love pink, pink is my favorite,\" Patterson said as she pointed out her pink bike.

When she bought it several years ago, it was black. She made it what it is today, she made it her fingerprint.

\"I had a vision and I ran with it from there. I was asking all of my friends what should I do. A lot of them are in to building bikes, and this what they gave me,\" Patterson said.

The Harley life is international. Ray Filsell traveled with 32 other members of the Plymouth, U.K. chapter of the Harley-Davidson Owner's Group.

\"We're going to do Route 66. We flew in to Chicago and we're gonna ride from Chicago through to Los Angeles, take us about two-and-a-half weeks to do that, about 2,700 miles,\" Filsell said.

The Harley museum and the Milwaukee Rally was one of their stops. The rally kicks off the largest free motorcycle rally in the Midwest. There are bike nights, museum tours, rides, anything a Harley enthusiast wants.

\"Just a great excuse to hop on the bike and ride. We expect people from all over the world descending on Milwaukee, coming home just to see where their bike was born,\" said Tim McCormick, with the Harley-Davidson museum.

Several new Harley-Davidson motorcycles for the 2016 model year were introduced as well.