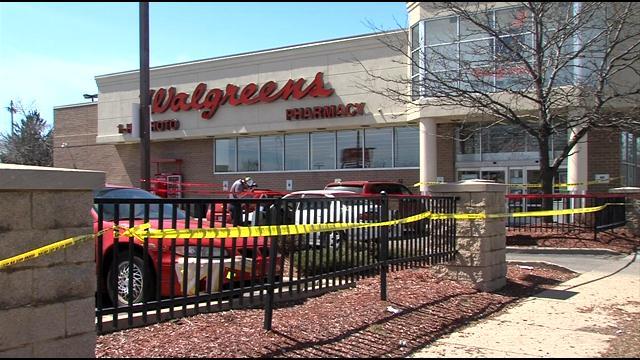 A pharmacy robbery on Milwaukee's north side is abruptly interrupted when an undercover officer shoots an armed suspect.

Criminals targeting city drug stores is on the rise and Milwaukee police say they're well aware.

\"It has become a fashionable crime to stick up pharmacies to rob them of prescription drugs and sell them,\" said Chief Ed Flynn.

Police chief Ed Flynn said that was the intent of two male suspects who went into a Walgreen's near Hampton and Fond du Lac around 10 a.m.

They were armed, wearing masks and hoods.

\"A third man waited outside in a vehicle that did not have any plates,\" he continued.

But before they could leave the store, Flynn said, \"a plain clothes officer aged 57 with 22 years on the job, fired one round striking the suspect.\"

Flynn said officers were in the area on an anti-robbery detail, working to combat a rash of armed pharmacy robberies. There have been 37 since last September.

\"We've arrested other crews for those robberies,\" Flynn said.

Surveillance video from a CVS last month shows just how brazen the suspects are. They walk in with faces covered, point a gun at an employee and fill bags with cash and drugs before fleeing the scene.

\"Our guys know they're working in a dangerous environment right now,\" added Flynn.

Hours before the officer involved shooting, police say two suspects robbed a Walgreen's on North 76th Street. They got away with prescription meds.

Police are still investigating if Wednesday's two robberies are connected.

The suspect shot by the officer was taken to the hospital. Two others are in police custody. The undercover officer is on administrative duty while the Department of Justice conducts its investigation.