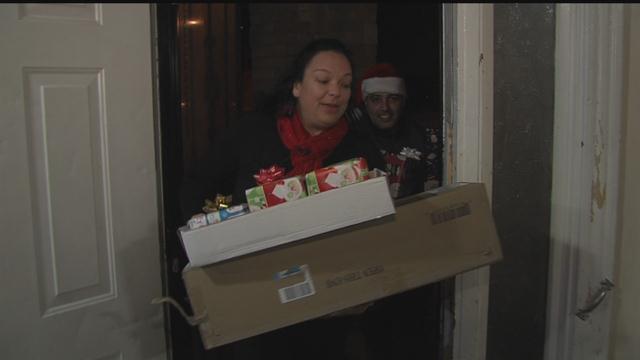 Yes Virginia, there is a Santa Claus and she wears a badge.
Officer Sarah Polka is the first ever woman trustee of the Milwaukee Police Association.

This year,  she spearheaded the adoption of two Milwaukee families for the holidays.

"We live and die by the starfish mentality," explained Mike Crivello of the MPA. "That it matters to this family. If we can have an impact on these two families, I think we've done a wonderful thing for the community."

The union reached out to a south side Alderman and the Apostolic Tabernacle Church in Sherman Park to locate two mothers who live on opposite sides of the city but because of many children, were stretched thin this year.

"Some of them made me choke up," Polka told CBS 58 News. "One girl just asked that her baby brother and sister be happy."

At first the union wasn't going to go public with their good deed.

Only at the urging of the families involved did they agree to allow CBS 58 News to follow along.

The gifts piled up in front of the memorial wall to the 61 officers who died in the line of duty. It served as a reminder for why they do what they do.

"We do it not only for the officers currently employed," Crivello said. "We do it in memory of all these officers."

Although they have a front row seat to the worst in life, the badge also presents an opportunity to show the community at its best.