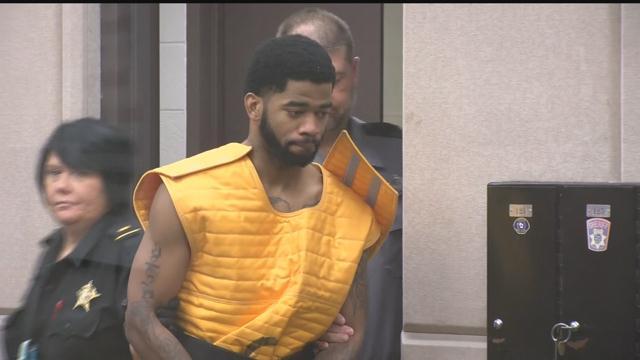 A Milwaukee Police officer.. charged with sexually assaulting two men and paying for sex with two other men.
Dominique Heaggan-Brown was in court Thursday afternoon wearing a suicide smock and given 100-thousand dollar bond.

Heaggan-Brown is the officer who shot and killed Sylville Smith back in August that shooting sparked two nights of unrest in the Sherman Park neighborhood.

One of the victims said he was assaulted just one day after that shooting. In fact, the criminal complaint states Heaggan-Brown and the man sat in a bar watching TV coverage of the second night of the protests.

According to court documents, on August 14th, less than 48 hours after he fatally shot Smith, Dominique Heaggan-Brown dropped off a man here at St. Joe's-a man who says the officer raped him.

Heaggan-Brown is  facing five charges including two counts of second degree sexual assault, two counts of prostitution and one count capturing an intimate representative without consent.

The most recent incident happened in August. Court documents show, a day after shooting Sylville Smith, Heaggan-Brown and another man got drunk at a bar.

While there, the officer told the victim "he was the boss...and there was no limitations to how [he] lived." He also bragged about being able to "do whatever [he] wanted to do without repercussions."

The man remembers very little after that, saying he woke up at Heaggan's home and " [he] was struggling to breathe as [Haeggan-Brown] raped him..he saw a gun in the room."

Heaggan-Brown later texted a mentor in the police department, saying "Need your help big time...F***ed up big time...But need to handle this in the most secret and right way possible."

"Shocking," said one neighbor who is in in disbelief, saying the officer was a quiet man for the most part.

"We didn't know he was even involved with Sylville Smith,"  he said.

But while searching the officers phone in this incident investigators found out in December of 2015 & this past July -Heaggan-Brown solicited multiple prostitutes.

We went to Heaggan-Brown's family's home  but were told no one would comment.

Meanwhile neighbors say while there were occasional parties and people loitering outside of Heaggan-Brown's home before he became a police officer, he changed once he had the badge and they never could have imagine what was going on so close to home.