NOW: Video shows the moment a man was brutally attacked with acid near 13th and Cleveland

MILWAUKEE (CBS 58) -- Milwaukee Police have taken a 61-year-old man into custody in connection with an aggravated battery that happened near 13th and Cleveland on Friday, Nov. 1.

Mahud Villalaz was left with 2nd degree burns after he says a man doused him with acid just before 8:30 p.m.

"I don't want this guy near my kids, my family or anything like that", said Villalaz.

The family of Villalaz released the following statement:

"We wish to thank Chief Alfonso Morales and all the professionals at the Milwaukee Police Department for their efforts in bringing the attacker to justice. We also wish to thank everyone for their thoughts and prayers during this difficult time.”

"It started burning really bad, I started screaming for help to the restaurant," said Villalaz.

People who live near the scene of the attack say they were shocked after hearing what had happened.

"I've been here for thirty years, I was shocked to hear something like that happened over here," said neighbor, Connie Miller.

"Been around here all my life," said Oscar Huizar, who lives in the area. "Not much has happened like that so this was like a major thing."

Neighbors are relieved to hear the suspect has been arrested.

"I hope they give him what he deserves, because that man did not deserve to have that thrown in his face," adds Miller.

"It makes me feel a lot more safer around here, another dangerous man off the streets you know," says Huizar.

The argument between the men allegedly started because of parking, but it escalated. Villalaz who is Hispanic, says the suspect asked him why he came to the U.S. illegally. Villalaz told the man he's a U.S. citizen.

The attack is a wake-up call for people who live in the area.

"Every day it's getting a little bit harder you know for a Hispanic male around here," said Huizar.

"Be more alert out here, because it's just not the same like it used to be when I was growing up," Miller adds.

Charges will be presented to the District Attorney's Office in the coming days.

MILWAUKEE (CBS 58) -- Mahud Villalaz, 42,  was left scarred with 2nd degree burns across his face after he says a man doused him with acid.

"I get ready to go inside the restaurant, he throw at me the acid…and I go like this and go on my face."

According to Milwaukee Police, the vicious attack happened Friday just before 8:30 p.m. near 13th and Cleveland on the south side. 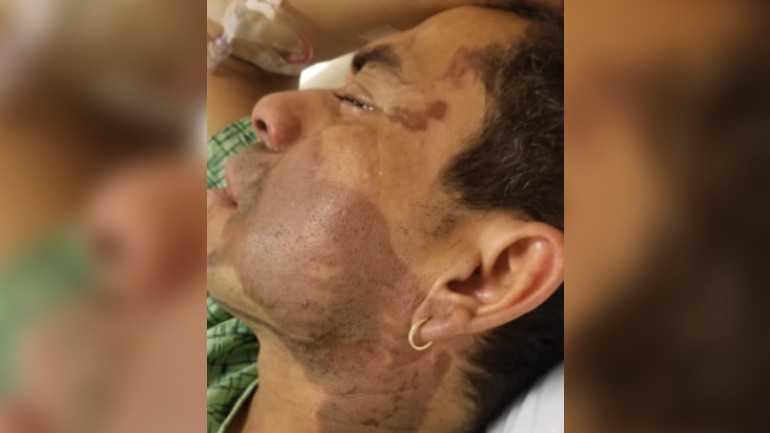 The two men got into an argument, initially about parking.

The situation escalated. "He started arguing, 'why you come here to invade my country? Why you come here illegally?' Sir, you don’t know my status, I'm a U.S. citizen too," Villalaz said.

According to Villalaz, the man got upset and threw what's believed to be battery acid at him.

State leaders condemned the attack at a press conference, calling it a hate crime. "I'm angry that a racist was able to live out his beliefs through violence against one of my constituents," said state Rep. Jocasta Zamarripa (D-Milwaukee).

Darryl Morin, president of the organization, Forward Latino, believes it was premeditated. "Because no one walks around with a bottle of acid and hangs out in a predominantly Latino neighborhood for no reason," he said.

Villalaz is trying to make sense of what happened to him.

"My son calls me today,” he said. ‘Daddy what happened to you?’ What I can tell him? Some crazy guy did this to me."

The attack happened in Alderman Jose Perez’s district. He issued a statement calling the attack heinous and said, “This was senseless violence and it needs to stop. We as a community need to come together to work through our differences and learn to respect one another and diffuse conflict."

Police are looking for an unknown suspect.

He's described as a white man, about 6 ft. tall with a medium build. He was last seen wearing a blue winter jacket, black pants and shoes. He was also carrying a black satchel, holding a silver aluminum container with the suspected acid.

MILWAUKEE (CBS 58) -- Authorities are investigating after a man was attacked with acid on Friday night, Nov. 1.

According to Milwaukee police, there was a verbal confrontation between the victim and suspect and the suspect threw what is suspected to be battery acid into the face of the victim.

The victim, a 42 year old male, received 2nd degree burns as a result of the acid attack.   He is being treated at a local hospital.

The unknown suspect described as a Caucasian male, approximately 6 ft tall with a medium build. He was last seen wearing a blue winter jacket with the hood up, black pants, black shoes, carrying a black satchel on his right side and holding a silver aluminum container containing suspected battery acid with a white shopping bag with unknown lettering.

Police are looking for surveillance that may help in the investigation.