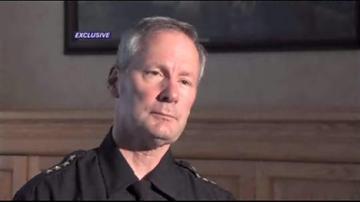 MILWAUKEE-Police Chief Ed Flynn spoke with determination if not a tinge of frustration Thursday night after a burst of gun violence the night before that wounded an 11 year old girl.

The gunfire came during the highly publicized \"Cease Fire Week\" in Milwaukee that will end a week of dialogue and meetings with a gun buyback on Saturday.

The Chief said despite a high quality police force, there's a more basic threat at work.

\" I could put you in jail ten times, but if you believe you need a gun to be a man. You need a gun to win a fight and you feel you have communal support to be an actor in that way then guess what we're going to continue to have men shot in the street and children caught in the cross fire.\"

Flynn believes his officers don't get enough credit for progress in neighborhood communications and trust.

But notes that the Milwaukee justice system is burdened and that as long as the state feels no responsibility to assist Milwaukee, the revolving door of armed criminals will continue.

\"You move far enough away to Deer land,  Wisconsin,  you're going to have all the criminal justice capacity you need in the world.  But you don't have nearly the societal challenges we have. You don't have anywhere near the violence problems we have.\"