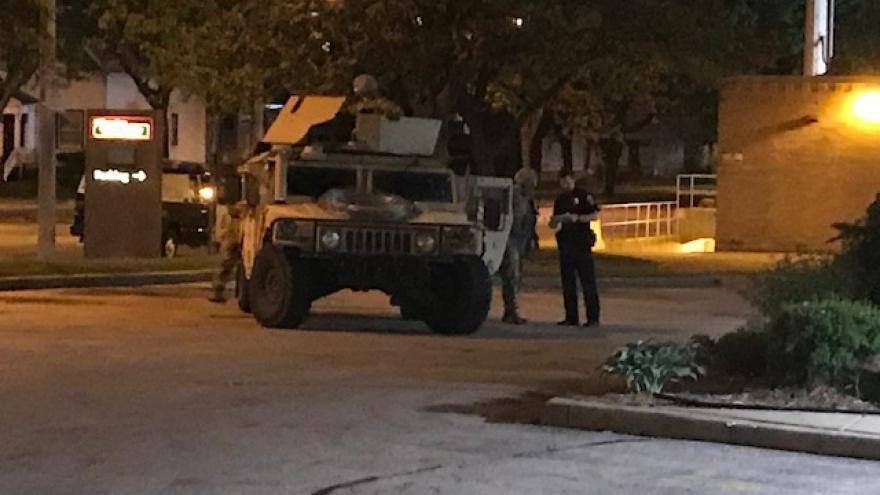 MILWAUKEE (CBS 58) -- Milwaukee Mayor Tom Barrett announced a 9 p.m. curfew for the city on Saturday, May 30.

This comes as the Wisconsin National Guard will also be sending 125 members to Milwaukee following overnight unrest, where 16 businesses were looted, according to Milwaukee Police Chief Alfonso Morales.

Violence erupted in Milwaukee overnight Friday, May 29. An officer was shot, and businesses looted.

"All persons shall cease vehicular and pedestrian travel on the public way, streets, sidewalks and highways and return to their homes, places of work or other convenient place.Government, social services, and credentialed press acting in their official capacity are exempt from this order," the order stated.

“It is critical that people are able to peacefully express their anger and frustration about systemic racism and injustice, in Milwaukee, the State of Wisconsin, and our Nation. This limited authorization of citizen soldiers from the Wisconsin National Guard will help protect people who are exercising their First Amendment rights and ensure the safety of the public.”

More on the order below:

Pursuant to Section 321.39(1)(a)5. of the Wisconsin Statutes, the governor is ordering into state active duty members of the Wisconsin National Guard necessary to support local law enforcement in Milwaukee County, beginning immediately. Specifically, the governor is authorizing 125 members to be immediately utilized by local law enforcement. Any additional members being utilized require direct verbal authorization from the governor. Any members called to active duty may only be used to provide support to local law enforcement and to protect critical infrastructure, such as utilities and fire stations, and cultural institutions necessary for the wellbeing of the community. The National Guard may not be used to impede the ability of people to peacefully protest or interfere with the media’s ability to report on these activities.

Barrett says the role of the National Guard will not be in patrolling the streets.

"But they can help protect valuable institutions, cultural institutions, places like childcare centers or churches or firehouses," he said.

"I thank Governor Evers for supporting law enforcement’s effort to help keep Milwaukee safe. His authorizing the Wisconsin National Guard to provide needed assistance to our effort helps gives us the ability to protect those choosing to exercise their 1st Amendment Right to peaceful assembly and at the same time deny attempts by those choosing to breach the public peace."

"Yesterday we experienced a couple of protests in the City of Milwaukee that started at one o'clock in the afternoon. Those protests, and the message was heard. They were conducted peacefully, the message was clear, and at the end of each and everyone of those messages, the end was non-violence," said Milwaukee Police Chief Alfonso Morales, "However, when the sun went down, things changed. It was another entity - that of crime, unlawfulness, distastefulness, and total immaturity."

In addition to businesses being looted, a Milwaukee police officer was shot. The 38-year-old officer has four years with the department and was treated and released from the hospital.

In response to the National Guard in Milwaukee, Leaders Igniting Transformation, an organization that advocates for changes affecting youth of color, issued the following statement:

Let’s make one thing clear: Our leadership in Wisconsin is reacting to Black pain by calling more police on us.

Our national, state, city, and school leaders continue to enforce white supremacy by throwing their full weight and resources into threatening, policing, and killing us instead of toward the actual issues we’re asking them to fix. Any statement from our elected leaders right now that isn’t calling for divesting from the police and military is perpetuating white supremacy by distracting from and devaluing Black lives.

For centuries we’ve experienced white supremacy and witnessed the murder of Black people at the hands of white cops, slave owners, and racist institutions. This country’s history is written in Black people’s blood. We know this history, and we stand on the shoulders of our ancestry in saying we’ve had enough. Protests in Milwaukee and across the country are disrupting the status quo right now to demand urgent attention.

Today our state, county and city executive leadership demonstrated a decision to ignore the pain and trauma Black people are facing. We are hurt, we are tired, and we are demanding change. Calling in the National Guard to police us instead of fix the issues we’re demanding is perpetuating white supremacy.

We are indeed in a state of emergency that needs our leadership’s commitment to no longer follow the status quo that got us to this point. Racism is an urgent crisis and Black people are dying daily. Disproportionately at the hands of police, disproportionately from COVID-19, disproportionately from lead poisoning, disproportionately by chronic poverty from systemic neglect, disproportionately from every health condition you can count from racism in every institution.  Yet our reaction to the daily death and dying of our people is met with constant occupation and policing. MPD already has military-grade tanks and weapons. They are on our streets daily. We do not need more militarization. Governor Tony Evers, Milwaukee County Executive David Crowley, and Milwaukee Mayor Tom Barrett continue to ignore our demands and instead are doubling down on the problem.

There’s an easy way to stop this. Listen to what our Black and Brown leaders are saying. Do your job to represent us. Stop killing us. When Black people are murdered, arrest their murderers. Remove racist police from our schools, neighborhoods, and communities. Invest in our neighborhoods and our lives so we can thrive. LIT has been organizing young people to remove police from schools, neighborhoods, and our city for years. We’ve researched the issue and have a concrete agenda to follow. Change is possible and we’ve started making progress.

This is a turning point for our city, state, and country. We are not able to place issues of racial inequity on the backburner any longer. It’s time for a new standard. It’s time to listen to the youth and tear down the systems that keep us from thriving.

Instead of an Executive Order to call in the National Guard, we urge Governor Evers, County Executive Crowley, and Mayor Barrett to all issue emergency orders to support Black lives and dismantle racist practices in all our institutions they have authority over:

Governor Evers, Mayor Barrett, and County Executive Crowley all have the chance to be on the correct side of history. In this historic moment, our leaders can use their power and resources to hear, prioritize, and invest in the needs and wellbeing of their Black and Brown constituents. Now is not the time for business as usual. We must all invest in dismantling our ancient, oppressive institutions to finally protect Black lives. Call off the National Guard.