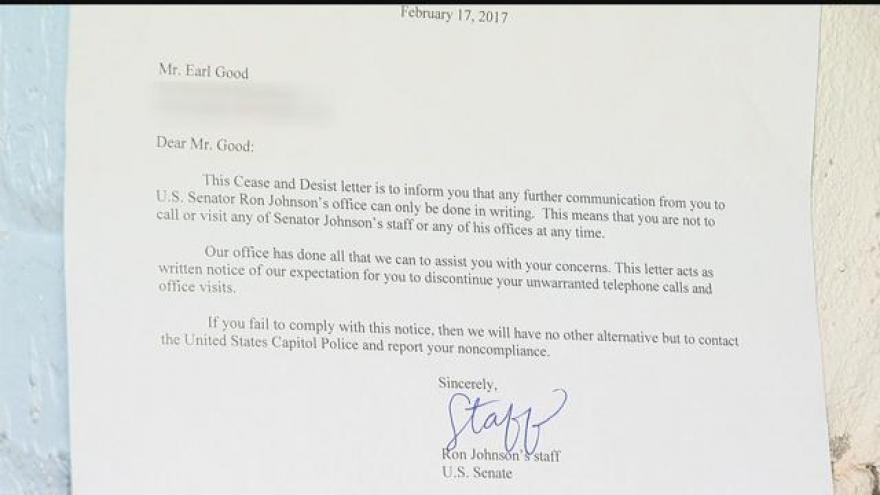 A Milwaukee man has called Senator Ron Johnson's office hundreds of times, and the senator's office has responded.

"Dear Mr. Good:
This Cease and Desist letter is to inform you that any further communication from you to U.S. Senator Ron Johnson's office can only be done in writing. This means that you are not to call or visit any of Senator Johnson's staff or any of his offices at any time. Our office has done all that we can to assist you with your concerns. This letter acts as written notice of our expectation for you to discontinue your unwarranted telephone calls and office visits. If you fail to comply with this notice, then we will have no other alternative but to contact the United States Capitol Police and report your noncompliance. Sincerely,
Staff
Ron Johnson's staff U.S. Senate"

Good is a Vietnam veteran and calls himself a concerned citizen. He is a registered Democrat and has taken issue with many of the things President Trump has said and done, things he says impacts him directly.

“The reason I reached out to Ron Johnson, I disagreed with several of the cabinet appointments that were made, and I was concerned about the Affordable Health Care Act, privatizing the veteran’s administration, the Russian hacking,” says Good.

He started calling Senator Johnson's D.C. office to voice his opinion after President Trump's inauguration. He says his goal was to influence how his U.S. Senator votes. Good admits he's persistent; so persistent, on one occasion he called Senator Johnson's office 83 times until someone picked up.

Good says he's been to Johnson's Milwaukee office on two occasions. He  calls the local office "accommodating," but takes issue with the response in D.C.

“I have been aggressive, but the reason I call multiple times is the issue of the day and also because I am a concerned citizen. And I will keep calling, and the reason I continue to dial is until I talk to someone in the office," says Good.

So far, Good has complied with the Cease and Desist. However, he did share the letter with Citizen Action of Wisconsin. The group posted the letter on Facebook, where it's received dozens of comments and shares.

A spokesperson for Senator Johnson responded, saying, "Constituents are always welcome and encouraged to contact our office with their concerns, regardless of political viewpoint. Unfortunately, very infrequently a pattern of inappropriate behavior emerges that crosses the bounds of decency and requires action to ensure the well being of visitors to the office and staff."

That same spokesperson says this is only the second time in two years a letter like this has been sent.