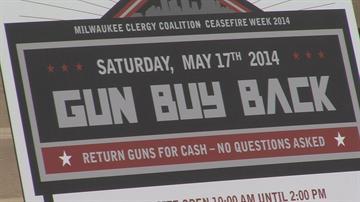 \"It's been disheartening to know that we still have much work to do,\" Pastor Don Darius Butler said.

Pastor Butler sees violence firsthand in Milwaukee almost every day.  His Tabernacle Baptist Church sits in the middle of a crime-filled north-side neighborhood.

\"This is something that's urgently needed,\" Butler said.  \"Something that we have to be intentional about creating environments to foster life.\"

City leaders decided Pastor Butler's centrally-located church was the perfect place to hold a gun buyback program.  From 10 a.m. to 2 p.m. Saturday, anyone can drop off any unloaded weapon with no questions asked.

\"[Guns] Secured in their trunks,\" Butler said.  \"They can pull up, the police department will secure their weapons out of the trunk.\"

People dropping off guns will get pre-loaded debit cards.  Private businesses will melt down the guns to make garden tools.

\"We've had way too many stories lately of children who have found their parent's guns,\" Mayor Tom Barrett said.

This is Barrett's 10th Cease Fire week, but the gun buyback element is new.

Critics have called the Cease Fire week and gun buyback symbolic at best.  The mayor knows gang members probably won't show up, but people that know them might.

The gun buyback will be held at Tabernacle Baptist Church on 2500 W. Medford Avenue in Milwaukee.  A peace rally and march will start at the church at 9 a.m.