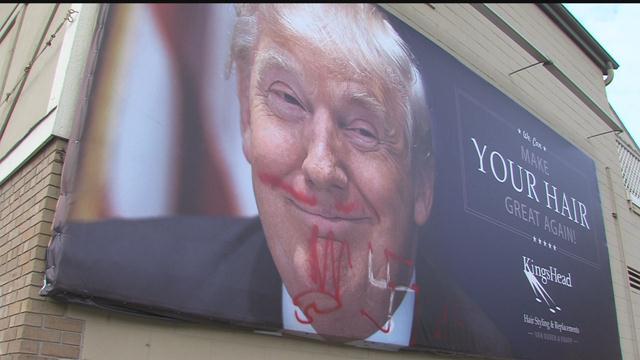 UPDATE: According to KingsHead Hair Salon, the Trump billboard is set to come down on Friday. For now, a previous billboard will replace it until they can design a new one. That new one will not have Trump on it.

ORIGINAL: On Milwaukee's East side, all eyes are on Donald Trump.

"I'm sick of looking at his stupid face every time I drive down this street," said community member Max David.

David said the brash presidential candidate is not a good reflection of American values.

"I think he's a despicable person," he said.

Here, the joke appears to be on Trump. KingsHead Hair Salon is using his bad mane saying, "we can make your hair great again."

"Everybody knows he's got the worse haircut in the world," said salon owner Dave Lemke.

It's a play on Trump's campaign slogan, but Lemke said the billboard has nothing to do with politics. Not everyone see's it that way.

"I think it's in poor taste," said David. "I'm glad people keep messing with it."

Vandals have defaced Trump with red spray paint, giving him a mustache and drawing a swastika.

Surveillance video shows the culprits in the early morning hours of Friday, March 11, running the through parking lot at Van Buren and Knapp. Hoods cover their faces.

It's the second time in a month this has happened. Lemke said it cost $2,500 to replace the first billboard.

"It's just disturbing that some young kids can go by and destroy personal property," he said.

Lemke tried to remove the graffiti and hasn't decided if the billboard will be replaced, come down or stay as is.

But Max David's vote is clear.

"I hope it gets taken down soon," he said.

Surveillance video from both vandalism cases have been turned over to Milwaukee police, who are investigating.