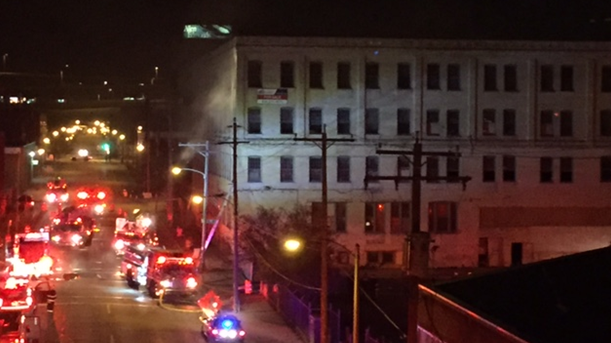 After receiving reports of smoke in the area, the Milwaukee Fire Department responded to a fire in a four story vacant factory-warehouse on  W St. Paul Avenue early Monday morning.  The fire was discovered around 12:30 AM in the brick and heavy wood timber building in the area of N 15th Street and W St. Paul Avenue.

Due to the size of the mill-construction building and its location, the fire was quickly raised to two alarms.   Fire fighters discovered fire at the rear of the building on both the first and second floors and were able to extinguish the blaze within 75 minutes.

According to authorities, no one was found in the building and there were no injuries reported.  The cause of the fire is under investigation, but according to officials, there was evidence of homeless people using the building for shelter.  The dollar amount of damage to the building has yet to be determined.