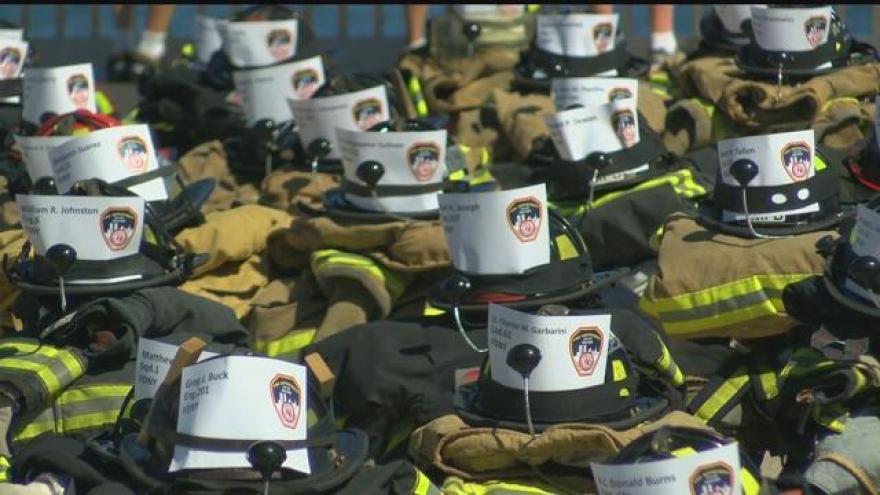 MILWAUKEE (CBS 58) – Sixteen years ago, terror attacks on the World Trade Center and the Pentagon shocked our country.

There is a series of events in Milwaukee on Monday, September 11, remembering those who lost their lives in the attacks.

Hundreds of police and firefighters went to the War Memorial Center to remember the heroes that made the ultimate sacrifice on 9/11.

Much of the focus was on the lessons we can take from the fallen.

Milwaukee Fire Lieutenant Matthew Ball says no matter how many years pass, he never forgets about the people who gave their lives to save others on 9/11.

“Walking up, grim faced but determined to save citizens, while normal citizens, guys like me, were running to save their lives. We all remember that. We all have to reflect on the good that that represents,” says Sen. Ron Johnson (R)- Wisconsin.

There were smaller ceremonies at five different fire battalions throughout the city this morning. Another ceremony will start at 4:00 p.m. Monday at Miller Park.

MILWAUKEE (CBS 58) -- On Monday, the Milwaukee Fire Department will pay tribute to the great losses suffered by our nation on September 11, 2001. Ceremonies will take place at 9:00 a.m. at the following firehouses:

MFD Honor Guard personnel will call attention and present arms for the salute in remembrance of the first tower collapse. A Chief Officer will begin reading the names of the 343 New York Firefighters who lost their lives, passing the list to department members present so all can take part in the reading.

An additional event will take place in the evening at Miller Park starting at 4:00 p.m. This event includes ladder trucks from the Milwaukee and Wauwatosa Fire Departments to display a large American Flag. There will be a 343 helmet display outside the stadium at the home plate entrance with the Greater Milwaukee Fire and Police Pipes and Drums performing.

The helmet and ladder tribute will be on display until just after sunset.