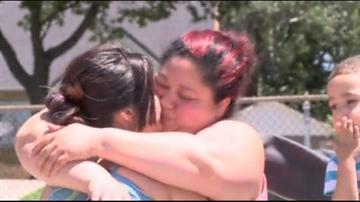 MILWAUKEE-What torture it must be for a parent who loses custody, making the day when they get their children back all the more rewarding.

On Tuesday,  the case workers at Franciscan Center of Saint A arranged for a special picnic to celebrate the hard work of many parents to satisfy the courts and get their children back.

They want to get the word out that there are success stories that emerge from once grim cases in children's court.

A Glendale father shared his story of being separate from his daughter for an entire year after her mom made allegations that his house wasn't fit.

\"That was the worst feeling in the world,\" Demetras Barfield told CBS 58 News. \"They came in while we were having dinner. That's why I'm just so happy she's back with me.\"

Struggles with care are often secrets among families, but the caseworkers want to get the word out that these parents should no longer feel ashamed.

\"They have to be honest with themselves,\"  explained case manager David Hagenson. \"Realize what the dangers were, so they can work together with us to have their children returned back to them.\"