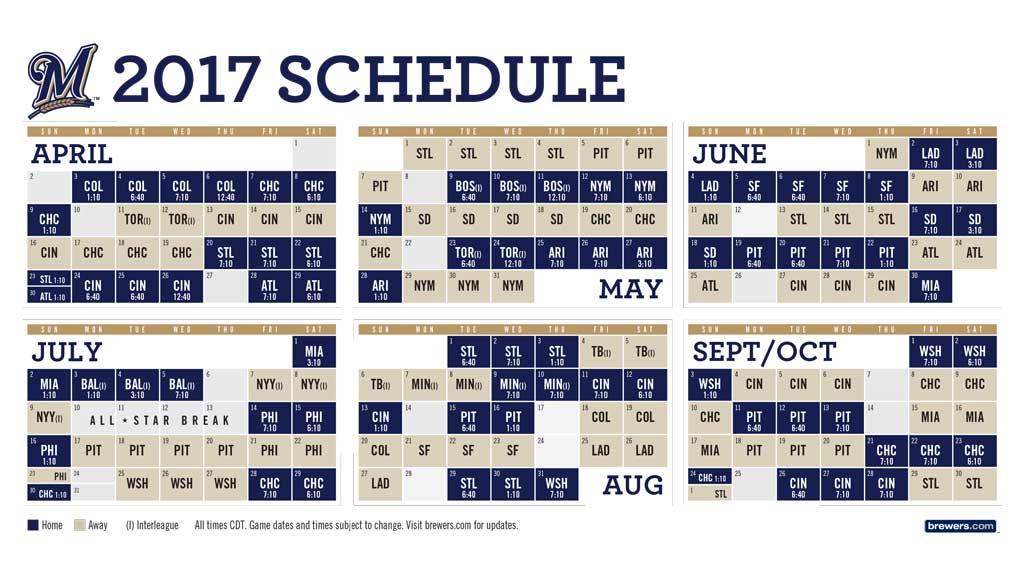 The Milwaukee Brewers announced the team’s 2017 schedule on Wednesday, which begins with Opening Day in Milwaukee against the Colorado Rockies on Monday, April 3 at Miller Park (1:10 p.m. start) as part of a four-game series.

According to a press release from the Brewers, the season-opening homestand also includes a three-game series against the Chicago Cubs from April 7-9.

The interleague schedule features games against each team in the American League East Division, as well as four games in the border battle against the Minnesota Twins. The Brewers will host the Red Sox from May 9-11, marking Boston’s first trip to Milwaukee since June 6-8, 2003.

The Blue Jays (May 23-24) and Orioles (July 3-5) will also travel to Milwaukee and the Twins will make their annual visit from August 9-10.

The Brewers will travel to Toronto to play the Blue Jays for their home opener (April 11-12) during Milwaukee’s first road trip. The Brewers will visit Yankee Stadium from July 7-9 for a weekend series against the Yankees directly before the All-Star break. Additional road interleague games will be played at Tampa Bay (August 4-6) and Minnesota (August 7-8).

The Brewers will play at home on Mother’s Day, May 14 vs. the Mets and Father’s Day, June 18 against the Padres. The Fourth of July features a home tilt against the Orioles, beginning at 3:10 p.m.