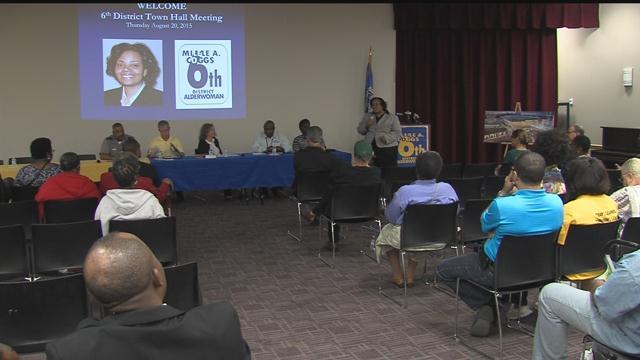 Residents voiced their opinions in Milwaukee Thursday evening for detailed plans from the Bucks on the new arena and the adjoining entertainment district, in which the City would help fund.

A town hall meeting was held at the Hillside Family Resource Center which is near the new arena site.

The City's Commissioner Rocky Marcoux and Bucks representative Sarah Watterson gave a presentation on Thursday laying out a lot of numbers related to financing the arena, and plans for opportunity in Milwaukee.

But residents who live in the Hillside neighborhood say they’re not buying the hype just yet.

Inside the Hillside Family Resource Center, residents fired off on why the city should not invest forty seven million dollars into a new Bucks arena, and addressed concerns in their own community.

\"I feel my dollars shouldn't help a billionaire get rich and it's not helping us on Capitol Drive,” one Milwaukee resident said.

The Bucks former and current owners are paying roughly half of the construction costs, with taxpayers responsible for the rest.

Among other promises, the Bucks organization says jobs in phase one of the project would go to local residents.

“Forty percent of those are going to be city and ten percent County residents,” said Bucks representative Sarah Watterson. “We're looking to employ a lot of small businesses and have diversity as well.\"

Once the billion dollar redevelopment project is complete in downtown, the City Commissioner says twenty five percent of the businesses will be Milwaukee based.

“You don't want to go to this live block thinking you're at anywhere USA,” said City Commissioner Rocky Marcoux. “You want to know hey I’m in Milwaukee Wisconsin. The only way you get that is to have a commitment to local businesses.\"

Alderwoman Milele Coggs hosted Thursday night’s town hall meeting and said it's important for people who live near the new arena site to voice their opinions.

(Reporter) What's your take on it? “I'm still in the information gathering stage,” said Alderwoman Coggs. “This is a part of that; I get to hear directly from my constituents what they think of it.\"

The City is also setting up its public hearing for August 31st, and the final vote for the City's investment could happen on September 22nd.