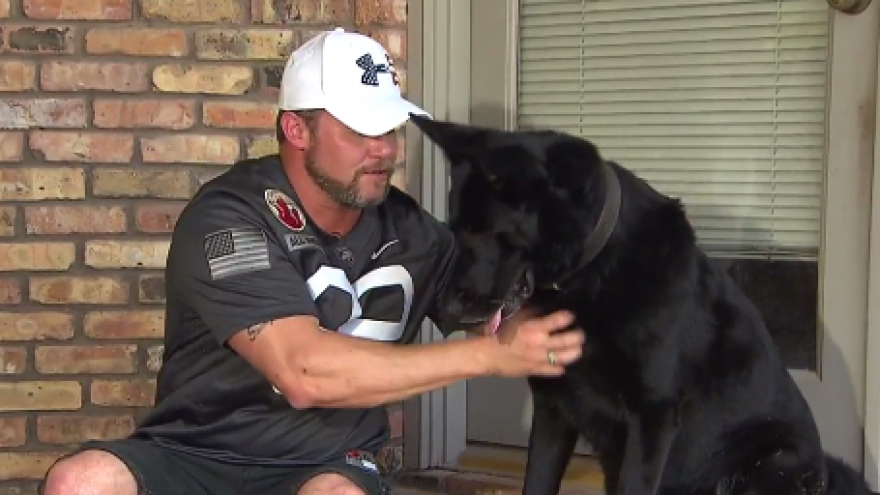 “My son would not be here today was it not for that dog,” said Joe.

The all black German Shepard stayed by Ryan’s side through the war.

After surviving countless missions with Satan by his side, something less sinister than war, but just as lethal almost took Henderson out. Trained as a tactical explosives detector dog, they became separated after Ryan had a grand mal seizure in Afghanistan because of his close proximity to bomb explosions.

“From the day that he got hooked up with the dog until he got injured, every day they were either on a mission or they were training and that’s his life,” Joe told CBS11 News.

Ryan was flown to Germany for treatment and was told another handler was caring for Satan. But when Ryan recovered, finding his buddy became his life’s mission.

Retiring from the Army, he started the process to get Satan back. But the army had allowed the dog to be adopted by another family. Satan was one of more than 200 MWD’s adopted to agencies and civilians after the army ended the TEDD program in 2014. Ryan says he was never given a chance to adopt his dog.

“My phone number and email is the same since before I joined the army,” he says. “If they called me, I’d pick up the phone and answer.”

His dogged and determined efforts led to Norma and Shawn Richardson in North Carolina. They had adopted Satan and they told him they were not giving him back.

“He’s like one of my children just about, I love him to death.”

THE FIGHT TO GET HIM BACK

Ryan wasn’t about to give up either.

Members of the National Animal Law conference saw CBS11’s story last May and asked Ryan to speak at their annual event in October of 2016.

That’s where he met Marilyn Forbes, an attorney from North Carolina.

“When I went to the conference, everyone told me if someone can help you, there’s a lady here. You need to talk to her before you leave.”

“She said she would work pro bono. Getting him back would be payment enough,” Ryan recalled.

For the first time in a long time, Ryan had hope. He filed a lawsuit against the family saying the adoption violated Ryan’s right of first refusal.
But Satan’s adoptive parents were steadfast in their decision.

“I know ultimately at the end of the day I may not be able to stop that, but I’m going to try,” Shawn Richardson said.

Days after that interview with Richardson, Ryan got the call he was waiting for.

“She could barely talk. I’m like, ‘oh God, oh God. She told me Mr. Richardson decided to give Satan back to me,” Ryan recalled.

“I called my Dad, and I said ‘Dad, we are getting Satan back but we gotta go now.”

The father and son drove through the night all the way to North Carolina.

A day later, Satan and Ryan were united.

LOOKING TO THE FUTURE

It is still hard for Ryan to believe he has Satan by his side. Ryan says they’re both a little bigger and a little older.

“He has got some gray hair like I do. We are both getting a little salt and pepper,” he laughed.

But the two picked up like no time had passed.

The Richardson family didn't give a reason for the change of heart and Ryan doesn’t need one.

“I don’t know what changed his mind. I am just glad that he did. Thankful that he did. He did a great thing.”

Now Ryan has another mission, a mission to help other handlers get their dog back.

“It’s not over by any means. There is a lot of stuff going on. And if you don’t find out why, how and who… it’s just going to happen again,” said Henderson.

The Army’s Office of Inspector General is investigating the entire adoption situation.

The report should be done this summer.