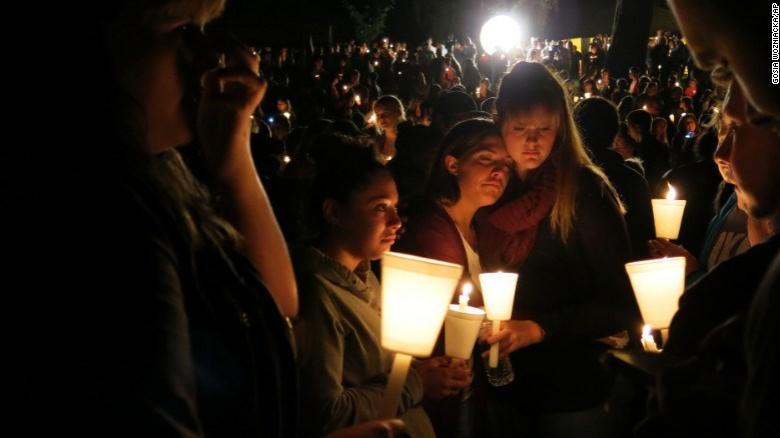 (CNN)He showed no mercy. He ordered his victims to the ground and shot them even if they complied. He asked them their religion but shot them no matter the answer. He even shot a woman in a wheelchair.

The description of the shooting that left nine dead at Umpqua Community College in Oregon came from one of the survivors, a woman who was shot in the hand.

The mother of another survivor said the shooter spared her son so he could deliver a message to police -- but then made him watch as his classmates were killed.

"The shooter asked him to give the police something, and that if he did, he would live," Summer Smith told CNN's Dan Simon.

"Mathew said at that point, he didn't quite get what the shooter said. He thought he was standing up to die, and that when the shooter gave him what he was told to give to police, he was then sent to sit in the back of the room ... and to watch what was going on."The female survivor, Tracey Hue, told CNN's Sara Sidner in an exclusive interview that she was sitting at the front of the classroom, facing the teacher, when the gunman entered with a shot.

"He just came in and shot towards the back of the wall and told everybody to get in the center of the room and on the ground," Hue said.

The shooter, Chris Harper-Mercer, 26, had guns and wore body armor, she said, and seemed determined to shoot. He didn't appear anxious or stressed, but rather "he seemed happy about it," Hue said.

Hue, a mother of three, said she's just happy to be alive. She and two other people were the only ones able to walk out of the classroom. Everyone else was either too wounded -- or dead.Those killed ranged in age from 18 to 67 and included a woman in a wheelchair, Sarena Moore, 44, who was in the class with her service dog.

"When he came in, he told everybody to get on the ground. Everybody tried to huddle to the ground," she said, including Moore.