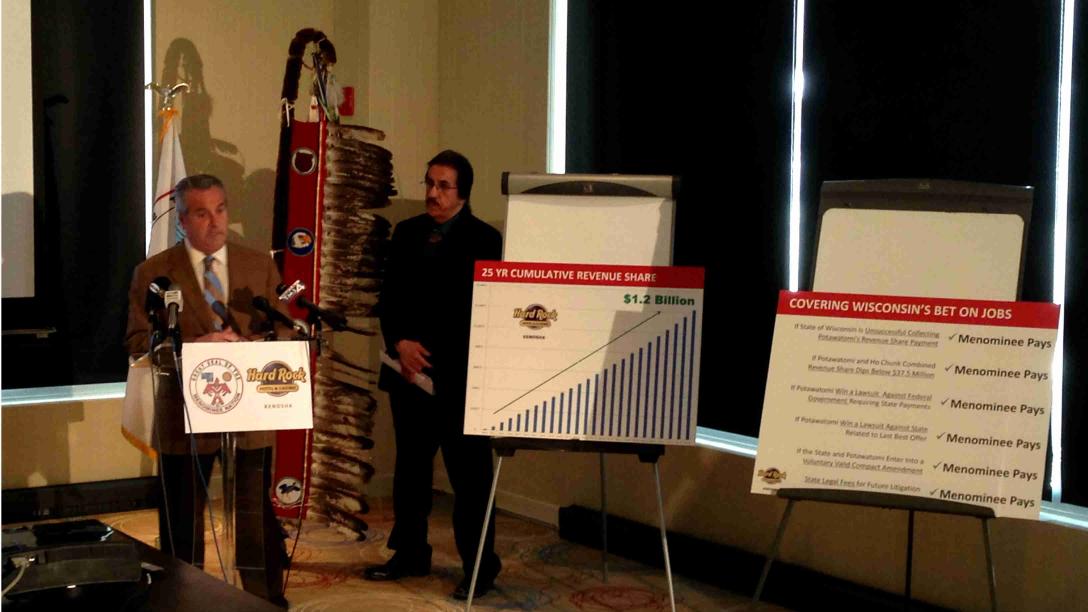 Governor Scott Walker rejected a proposal from the Menominee Indian Tribe to build a new casino in Kenosha last month, but Tuesday, the tribe presented a counteroffer in an effort to get Walker to change his decision.

The tribe held a press conference in Milwaukee, announcing it will contribute $220 million to cover state taxpayer share for a new Milwaukee Bucks arena downtown -- if its proposed Menominee Hard Rock Kenosha Casino & Hotel is allowed to move forward.

Menominee Chairman Gary Besaw said that in addition to keeping the basketball team in the city, the move would free up taxpayer money slated for the new arena, and allow it to be redirected to support critical state needs.

“Providing public funding for sports facilities is always a dicey political proposition,” Besaw said. “Our proposal eliminates a big political problem and creates a major advantage to state taxpayers. We want Wisconsin to stay big-league. But we also want to help make sure State taxpayers don't bear the financial burden of keeping the team.”

Besaw also said the Menominee tribe will increase the bond it would post to cover any potential state losses from other gaming agreements. They said they've also talked with federal agencies that believe the Potawatomi compact would not hold up in court. They said their increased bonds will also cover any possible lawsuits.

The deadline for a final decision on the casino proposal is due February 19, meaning Walker still has time to change his mind. However, in a statement, Walker's office says it's less than likely that he will since money for the new arena would be coming from projected income from team taxes and television contracts.

\"It's important to note that Governor Walker's 'Pay Their Way' plan for the new arena protects current taxpayer dollars,\" the statement reads. \"The $220 million would not come from current GPR.  Rather it is in the form of an appropriation bond to be paid back by projected growth in income taxes from the Bucks, as well as visiting teams, due to salary increases and new TV contracts.  Once the bonds are paid off, tax growth would return to the state. Governor Doyle's compacts with the tribes open up the State of Wisconsin to significant litigation risks.  Due to those compacts, the long-term economic hit to the state budget would be a potential loss of hundreds of millions of dollars.\"

Speaker Robin Vos, a supporter of the casino proposal, said he is happy to see the Menominee tribe fight, but also says the hearty offer may not be enough to sway Walker.

\"I commend the Menominee Tribe for not giving up on creating thousands of jobs in Racine and Kenosha counties,\" Vos said in a statement. \"I continue to support the tribe's efforts to get approval for the Kenosha casino.  This proposal is an exciting opportunity and could be a win-win for everyone involved. However, even if you believe this proposal is a game changer, we must come to terms with the real possibility that the governor may never reverse his decision.”