Meet A Real-Life Darth Vader, Who Uses the Force for Good in Tennessee 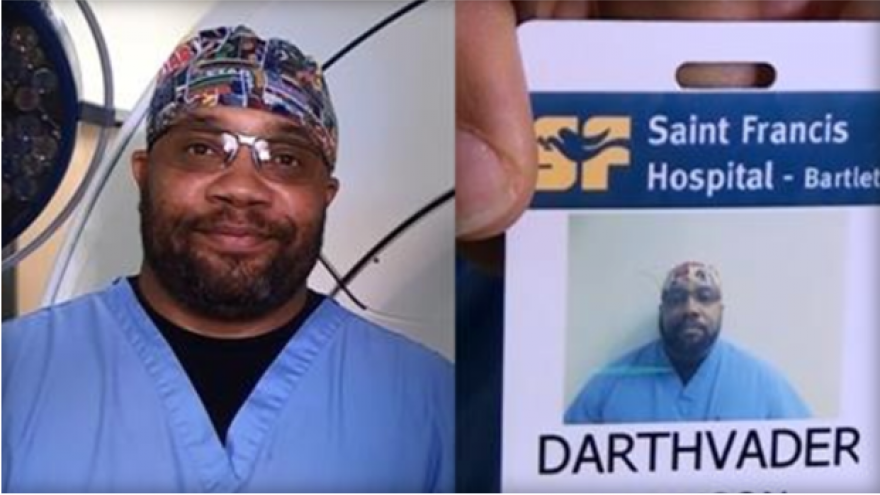 (CBS) In Memphis, Tennessee, Darth Vader is alive and well — and turning to the light side of the Force to help others in need.

Darthvader Williamson, who spells the Dark Lord of the Sith's name as one word, is a surgery technician at Saint Francis Hospital-Bartlett. He's been assisting surgeons at the hospital for nearly 10 years and working in the profession for 21. And yes, that's his real name.

But he doesn't tell that to patients before they head into the operating room.

"When you're stressing that's when mistakes start happening," Williamson told CBS News. "We try to keep a cool environment, and it goes a whole lot better if they are nowhere near aware that my name is Darthvader. By the time they get to me they have no clue, they're sedated."

The stares, questions and "Star Wars" jokes are something the 39-year-old has become accustomed to since his dad decided to name him after Darth Vader when he was born on January 14, 1978 — less than a year after the first film in the series was released on May 25, 1977.

"I guess he was a sci-fi buff," Williamson said. "Most people gravitate toward a character that stands out."

Williamson's dad originally wanted his son to go by "Lord Darth Vader," but his mom drew the line. The couple compromised with "Darthvader."

As a "skinny kid" growing up in Miami, Williamson said he never identified with the powerful, evil character.

"I knew I was named after an intergalactic bada**," Williamson said. "But I was nothing like this guy. He's choking people and when they see him people fear him."

In fact, when he was in third grade he refused to respond to his name whenever his teacher would do roll call.

"Why don't you answer when I call your name?" the teacher asked.

"That's not my name. I changed it," Williamson lied.

The school contacted Williamson's mom about the issue. She told her son he could legally change his name if he disliked it that much, but Williamson agreed he'd just "deal with it."

As a teenager, Williamson learned to embrace it. After all, it was attention-grabbing and girls couldn't help but notice him.

"It worked to my advantage," Williamson joked.

That's not the only time the unique name worked to Williamson's advantage.

Williamson's been offered free Taco Bell and pizzas and he's even gotten out of traffic tickets.

"I can't even name some of the stuff that happens," he said.

Williamson has a big family — with 68 cousins — and they all get a kick out of his stories. His children, however, aren't amused.

"They cannot stand the attention," Williamson said, adding that he has two daughters and two stepsons. "They're always like, 'It's just a name. He's our dad. Can we go now?'"

It may be "just a name," but Williamson knows it will be a force in the rest of his life, and he's OK with that.