NOW: Milwaukee police searching for driver of red Chevy Impala after man struck and killed near 27th and Burleigh

MILWAUKEE (CBS 58) --Milwaukee police are searching for a vehicle involved in a crash that left a 37-year-old man dead near 27th and Burleigh.  It happened Thursday night, Oct. 28. The victim was identified as Kevin Johnson.

Deadly pedestrian crashes are up in Milwaukee compared to the same time period last year. There have been 13 in 2020 and 15 so far this year. Johnson has been added to that list.

David Peters lives nearby and he says it's a dangerous intersection.

"You see that concrete pole right there on the corner, that's been taken down like four times already," Peters said. "They don’t care about no speed limit, they don't care about stopping at a stop sign."

According to the ME's report, Johnson was crossing the street from a gas station driveway when he was struck by a vehicle traveling southbound. Officials say Johnson was thrown into the northbound lanes and subsequently struck by two or three more vehicles.

The report says the driver of the first striking vehicle lived nearby. She parked her vehicle, a 2015 GMC Arcadia, before returning to the scene.

Authorities say the woman stated that she did not see Johnson crossing the road. He was wearing all dark clothing, it was dark outside and raining at the time of the accident.

Police are searching for a vehicle that struck Johnson traveling northbound and left the scene. It's described as a red 2000-2005 Chevrolet Impala. The vehicle did not have registration plates displayed. The vehicle will have significant damage to the front end. 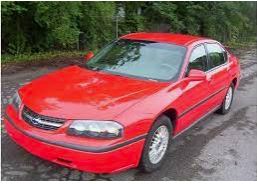 Anyone with information on this crash is urged to contact the Milwaukee Police Department at 414-935-7360 or Crime Stoppers at 414-224-TIPS or P3 Tips App to remain anonymous.