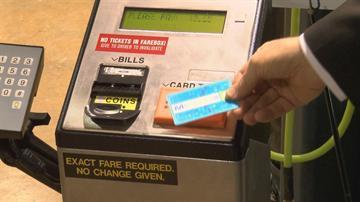 MILWAUKEE -- Fifteen-year bus driving vet Carmita Lampkins has been waiting to see some of the upgrades Milwaukee County Transit is adding to its fleet.

\"It is a long time coming, but we're very glad to have it,\" Lampkins said.

Electronic fareboxes will read cards you carry with you and reload, a real-time locator will show you where your bus is and an automated system announces all the stops.

\"This isn't 'Bang, tomorrow you're going to have a new system out there,'\" MCTS Spokesperson Jacqueline Janz said.  \"We're going to be educating.   There's going to be bumps along the way, we're going to work together to make them all work.\"

Ninety of the nearly 400 county buses have replaced the 27-year-old fareboxes.  The rest will go in by the end of December. The system will always accept cash, but eliminates paper transfers.

\"Not having to come up with the correct change and things like that,\" Lampkins said.  \"Get the card, tap it on the farebox and then they're ready to roll.\"

The GPS system is similar to one Chicago uses.  You can look at your smartphone or computer to find your bus.

\"You'll be able to stay inside with the warmth of your house, especially on a day like today and be able to look  at your computer and know exactly where your bus is,\" Janz said.

Rider Kenneth Minor appreciates that system, but is worried about the farebox not working like it used to.

\"You don't even get a transfer back with the cash,\" Minor said.  \"But I guess you don't have to worry about the people that don't have any money that beg you for your transfer when you get off.\"

Taxpayers will see a minor increase, but the transit system says people have been asking for these changes.

\"This is public transportation, we can't do it without our riders,\" Janz said.

Almost all of the multi-million dollar upgrades come from federal stimulus and grant money.  They should all be in place by the end of 2014.