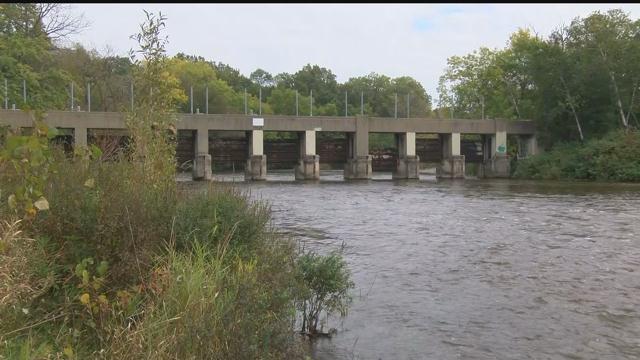 The flood gates at Estabrook Dam have been opened for years, after the DNR said repair it or tear it down.

The Milwaukee County Board says they've wanted to repair it since 2013.

Opponents say the cost is too high.

On Monday, Milwaukee Mayor Tom Barrett and Milwaukee County Executive Chris Abele announced they plan to rezone the area around Estabrook Dam and sell it to the Milwaukee Metropolitan Sewerage District, MMSD for $1. They say MMSD will remove the dam for a quarter of the cost it would take to fix it.

"What we've asked, to be clear, of the county board is simply have a vote on the Estabrook Dam," said Abele. "[Board Chairman Lipscomb Sr.] has prevented that through using all sorts of parliamentary maneuvers for years."

"I think everybody would prefer to have the county act on this on its own. That hasn't really happened regarding a transparent vote on this," said Barrett.

"I often explain that dams are like having a clogged artery. It's not good for the health of the river," said Nenn.

Nenn explains Milwaukee Riverkeeper has a pending lawsuit with the Milwaukee County Board because the dam is dangerous and unhealthy to the environment among other reasons.

"Our frustration with the county board is they've never done a clean vote on the dam where they've looked at the pros cons and cost involved," said Nenn."If it's not maintained it could fail and kill somebody downstream or damage property, which is why the DNR ordered that it would be open permanently in 2009 until it was removed or restored. I think that they haven't always taken their responsibility as a dam owner seriously."

The Milwaukee County Board says none of the accusations are true.

"We have decades worth of public meetings and public votes and they want to say it wasn't transparent, and I think that is the biggest insult to all of us here," said John Weishan, Supervisor District 16.

Weishan says Barrett, Abele and MMSD have not been transparent about their plan, and he believe tearing down the dam opens a floodgate of problems.

"What they're really trying to cover up is they want to privatize and sell off your park system," said Weishan.

The plan cannot start until rezoning is approved by the Milwaukee Common Council.