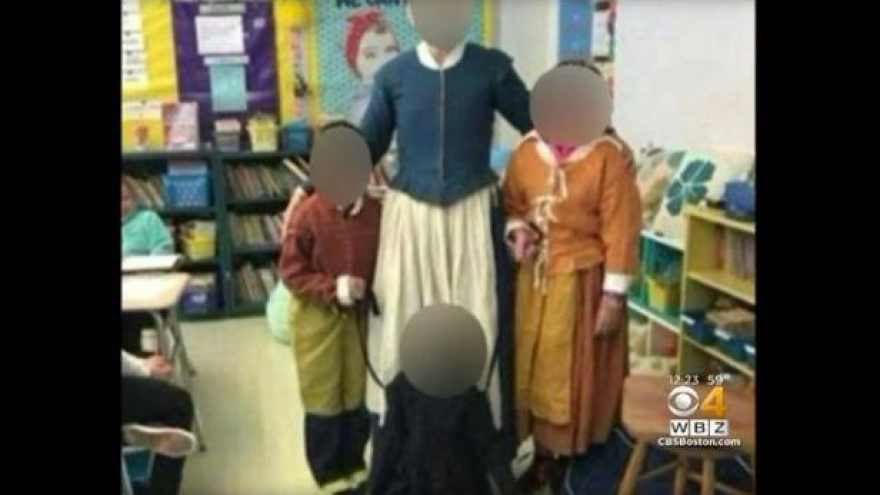 BRIDGEWATER, Mass. -- There is growing outrage over a classroom photo taken at an elementary school in Massachusetts that administrators say has been taken out of context.

CBS Boston reports the photo was taken at Mitchell Elementary School in Bridgewater during an enrichment program about the Pilgrims.

But it's now become a lesson in appearances. Some say the photo looks like a young black girl was being enslaved by her classmates.

"If you look at that picture out of context, what are you going to think? It's clearly what it looks like, it's disgusting," said a parent who wished to remain anonymous.

Social media exploded when the photo was posted. School officials say the instructor in the photo is the director of education at Plimoth Plantation.

The straps that are pictured around the 8-year-old girl are so-called "lead strings" that were used in the 17th Century to keep children from wandering or to help them learn to walk. The girl apparently volunteered to take part in the lesson.

Parent Andrea St. Clare was so stunned she picked up her child early from school.

"It seems like enslavement of a person. Even the color of the child has nothing to do with it," she said.

Superintendent Derek Swenson issued a statement saying, "It was never the intent of the lesson to demean or degrade any one person or group. The Bridgewater-Raynham Regional School District sincerely apologizes to the students, staff and community at large for this unfortunate incident."

Some parents say it could have been handled better. "I can't imagine anyone meant any harm, but the basic fact is someone wasn't thinking," one parent said.

The parents of the student say they have met with administrators.

A spokesperson for Plimoth Plantation also apologized, but said it's a program they've taken to numerous classrooms.