Marquette, ReWalk Help Milwaukee Man Get Back on his Feet 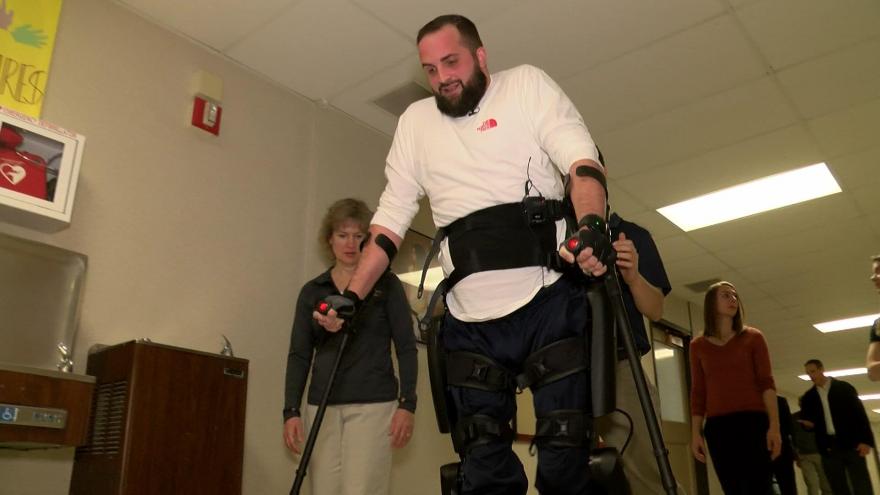 A Milwaukee man paralyzed in a work accident is now one of only about 100 people in the world, and the only one in Wisconsin, using a ReWalk robotic exoskeleton to walk again.

After moving from his wheelchair to the ReWalk device during a session at Marquette University’s Physical Therapy Department, Matt Nevaranta straps in, presses a button on his watch, leans forward and stands.

"I think any time a person is in a position like myself, you know, you'll do anything you can to walk again or stand up." said Nevaranta. “It's a device like ReWalk that allows that to happen. It's a pretty surreal feeling to have technology kind of catch up to my hopes.

The device has motors in the hip and knee joints to move Matt’s legs.

"It's been pretty crazy to actually get back upright and start walking again." he said.

Eight years ago, Nevaranta was paralyzed when 3,000 pounds of aluminum forms used in his construction job fell on him and broke his back.

He tried physical therapy and even went to Germany to try a stem cell treatment. Eventually, his sister came across ReWalk Robotics.

"It's been a long, ongoing battle since then but I'm here today." Nevaranta said.

Matt, his pro bono attorney and ReWalk fought in court to get Matt into the ReWalk system. A judge ruled in his favor, ordering the worker’s comp insurer to pay for the device but it wouldn’t cover the sessions needed to learn to use it. That’s when Marquette University stepped in.

"We offered to provide those services at no charge as a learning opportunity for the students as well as an opportunity to expand the clinic offerings." Said Dr. Tina Stoeckmann, MU’s residency program director.

"The idea is to challenge Matt enough and simulate certain tasks that are situations that might happen in the outside world.” Said Marquette Physical Therapy student Zachary Vandenberg.

"It's getting a lot easier every time.” Matt said. “It's crazy how much progress you can make in a short amount of time on this thing."