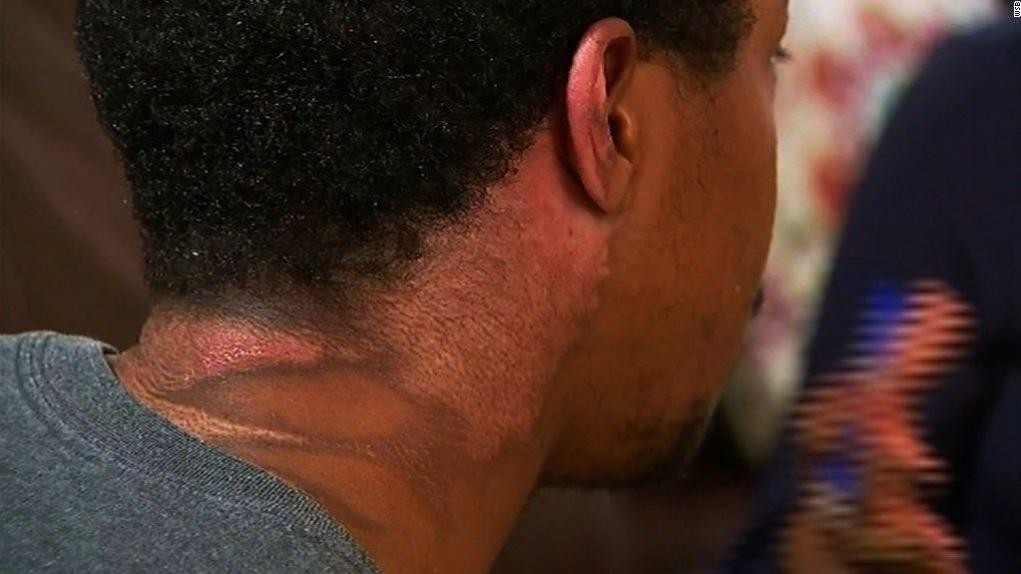 (CNN) A man has been sentenced to 40 years in prison after being convicted of throwing boiling water on a sleeping same-sex couple.

The pain is excruciating

Anthony Gooden and his partner were asleep in their Atlanta apartment when Blackwell, the boyfriend of Gooden's mother, poured scalding hot water all over them.

Gooden was in the hospital for over a month. His partner, Marquez Tolbert, sustained second- and third-degree burns on his neck, back and arms. He spent 10 days in the hospital.

"The pain doesn't let you sleep. It's just, like, it's excruciating, 24 hours a day, and it doesn't go anywhere," Tolbert told CNN affiliate WSB shortly after he was released from the hospital in March. "I can barely think straight because the burning, the stinging is everywhere".

Blackwell told police after the attack, "they'll be all right. It was just a little hot water on them." He didn't agree with the gay couple being in the house, even though the house wasn't his. It belonged to Gooden and his mother.

Gooden's mother had been dating Blackwell around three years at the time of the attack.

"I don't see how somebody could be so hateful. You could be with somebody for a long time and never know who they are," she told WSB. CNN reached out to Blackwell's attorney for comment but did not get a response.

"When I'm out in the sun, it hurts. It's basically like you're being burned all over again," Tolbert said.

Both men testified against their attacker in court Tuesday.

"It was agonizing; it was excruciating," Tolbert told the jury through tears. The judge had to order a recess when Tolbert couldn't stop crying on the stand.

Gooden had visible burn scars across his face when he took the stand. He told the court he hasn't been able to work since the attack. Both his arms suffered severe damage, and the attack has left him disabled.

After the verdict, the men say justice has been served.

"I'm ecstatic. I mean I think justice has been served so I'm good," Tolbert told WSB. "It made me feel really good and it helped me heal."

Tolbert says he hopes to one day forgive Blackwell for what he did.