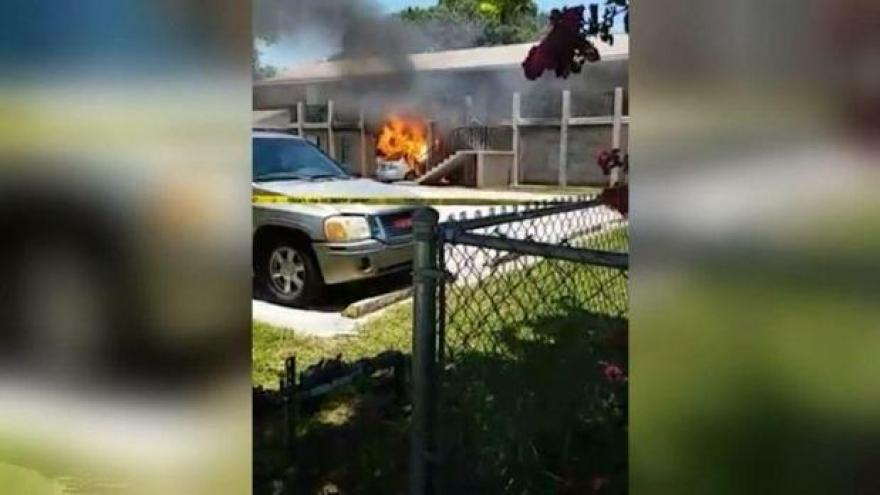 (CBSNews) FORT PIERCE, Fla. -- Police in Florida say a 31-year-old man on Tuesday loaded propane tanks into his car and rammed it into an apartment building where his former girlfriend lived.

Fort Pierce police spokesman Ed Cunningham tells Treasure Coast Newspapers that five adults and a toddler escaped uninjured through a back door when Carl Philbert, who died in the crash, smashed the vehicle into the Fort Pierce building and it caught fire.

In a video shared with CBS affiliate WPEC-TV by neighbor Kathy Toledo, a white sedan can be seen aflame, half inside a ground-floor apartment in the building. Narrating the video, Toledo is heard saying that an older woman had been in the room directly above the impact and that her husband Pablo carried the woman down the stairs to safety.

The car is then seen exploding and the flames reach to the structure's second floor.

Cunningham says Philbert was an immigrant from Haiti who had been staying at hotels in the area.

Eileen Cuevas, 26, told TCPalm.com her mother was in the front room of the family's apartment when she saw Philbert, her mother's ex-boyfriend, driving toward the home and then saw the car ram through windows and into the living room.

"As soon as he came in through the window, I just jumped up and grabbed my son, ran out the back door with him," Cuevas said. "I got my mother and my grandmother and everyone out of the house."

Cuevas said she didn't know what would have motivated Philbert to attempt to blow up the home.

"It's very personal," Cuevas told TCPalm. "It's still weird talking about it. He was trying to get to my mom. It was meant for everybody that was in the house. I mean, the man had four or five propane tanks in the car. They were friends and it turned out really bad. This is very personal for our family, so it's kind of touchy."

The St. Lucie County Fire District said in a news release that all eight units at the apartment complex were damaged. The American Red Cross was assisting 13 adults and five children displaced by the fire.

The incident is being investigated by fire officials, police and the state Fire Marshal's office.

A picture posted on the Facebook page for St. Lucie County Fire District purportedly shows the aftermath of the incident.