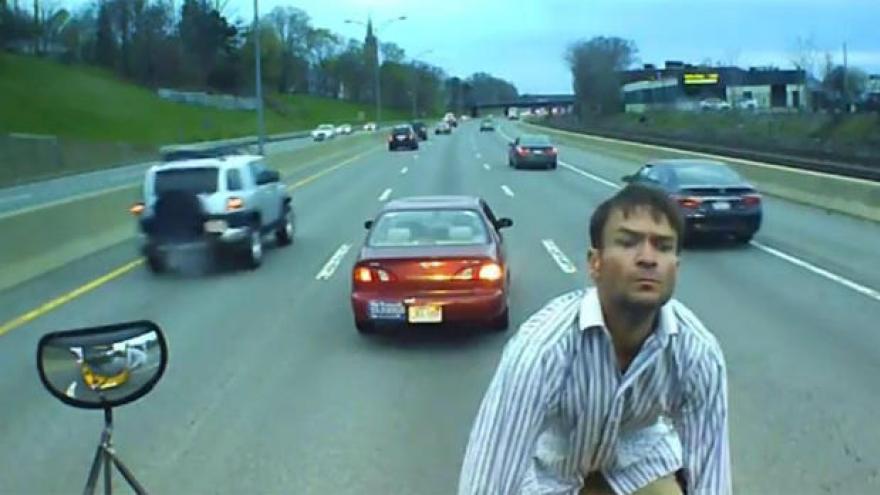 NEWTON (CBS News) – Massachusetts State Police say a 42-year-old Dorchester man forced a school bus driver to stop then jumped on his hood in the middle of the Massachusetts Turnpike in a bizarre incident that was caught on dashboard camera. CBS Boston reports that around 7:30 p.m. on Tuesday, the bus was traveling westbound near Exit 16 in Newton. The man, driving a 1999 Toyota Corolla that was swerving in traffic, waved out his window for the bus driver to pull over, then slowed to a stop in the center lane.

The man walked up to the bus, tried unsuccessfully to get through the bus door, then hopped on the hood.

Joe Rizoli, the bus driver, said the man began yelling to him, "Why are the windows on your bus dark?"

"In the middle of the Mass Pike he stops! And he gets out of his car like, 'I want to talk to you,'" said Rizoli. "So he comes around the bus coming in on my door. Now I'm not letting him in my door, and then he starts to climb on the bus.

Rizoli did not get out of the bus, which had no students on board. When he pointed out the dashboard camera on the bus, the man jumped down from the hood.

As the man walked back to his car, the bus driver pulled around him and drove off.

Rizoli, who has been driving school buses since 1979, said it's the strangest thing he's ever seen.

"My concern is this guy, he really broke a lot of rules here, a lot of laws," Rizoli said.

Rizoli said the incident is one example of why all school buses should have cameras to document what's happening in front of them.

"I just think he needs help. It was so dangerous for all of us, for him, for me, the people behind us could have smashed into us," Rizoli said.

CBS Boston reports that police have identified the man using clues from the video, and the incident is under investigation.