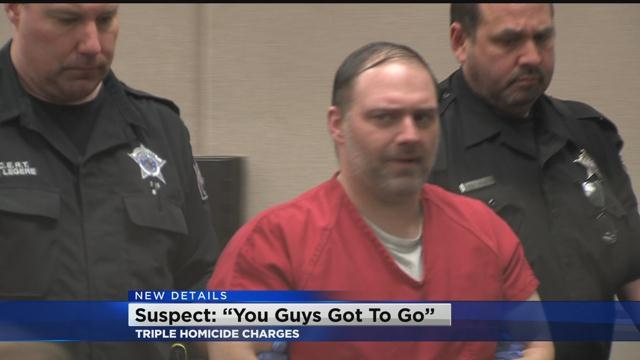 Charges came down in Milwaukee County Court on Wednesday for the Milwaukee man accused of killing three people at his apartment building over the weekend.

Authorities say he shot all of his victims in the head and asked a man about his race before his actions on Sunday.

39-year-old Dan Popp is charged with three counts of first degree intentional homicide as well as one attempted homicide charge.

Popp said nothing on the record during intake court but did softly ask his attorney why there were so many cameras in the room.

Popp is accused of using a rifle to kill three people - all tenants at the apartment building at 3330 South 92nd Street. According to the criminal complaint, the night of the shooting he offered one of his future victims a beer and asked him where he was from.

Jesus Manso-Perez responded he was from Puerto Rico, according to the criminal complaint.

Minutes later Perez's son witnessed Popp saying "You guys got to go" before Popp shot Jesus Manso-Perez in the head, according to the criminal complaint.

Next Popp forced his way into the apartment of Phia and Mai Vue and their four children. Authorities took witness statements describe the husband - Phia - getting shot by Popp in that family's bathroom.

Later popp would drag Mai Vue - Phia's husband - upstairs to shoot her in his own apartment, according to the criminal complaint.

On Wednesday the suspect's attorney asked for a competency hearing before things move forward.

"Well, I just met Mr. Popp actually for the first time this morning. And from what I understand back in 2008 he spent a brief period of time at the Milwaukee County Mental Health Complex. And he's also being treated at the VA for some mental health issues," Christopher Hartley, Popp's attorney, said.

"And so I'm not quite sure exactly right now what his mental health diagnosis is but that's obviously what we're trying to accomplish when we do the evaluation," Hartley said.

Hartley also said Popp served from 1995 to 2007 in the Wisconsin Air National Guard. He had no criminal history until this event.