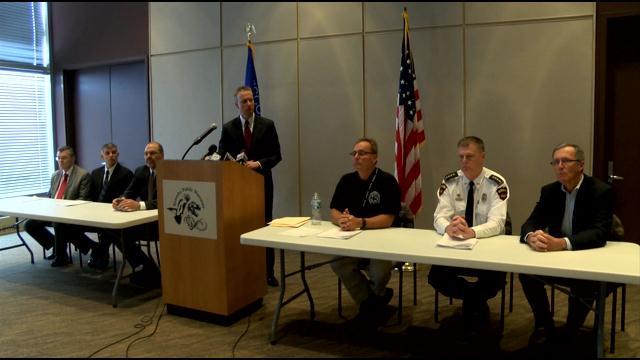 State and federal authorities arrested 44 suspects in a drug bust in Kenosha County. Most of them are members of the Gangster Disciple Street gang operating out of Racine and Kenosha County, said Gregory J. Haanstad, U.S. Attorney for the Eastern District of Wisconsin.

Twenty-four of the suspects face federal charges after authorities said they were selling drugs that included heroin and cocaine. Four of them face life in prison, if convicted.

\"The investigation that was collaborative among other things was the use of undercover agents, wire taps, surveillance, and the execution of about 20 search warrants,\" Haanstad said.

Robert Zapf is the Kenosha County District Attorney. He said he has been in law enforcement for 40 years.

\"I can honestly say that this operation is one of the most successful in terms of number of arrests and the best coordinated effort from federal, state and local investigators that I can remember,\" Zapf said.

Zapf had a strong but simple message for drug dealers.

\"You sell drugs, you get arrested, you go to prison,\" he said.

More than 15 agencies worked together to make the arrests. Kenosha County Sheriff David Beth said, \"It's a pretty proud moment as far as Kenosha goes to think that we took down some of these people who are hurting our kids, and not only our kids but our adults.\"

\"We're trying to attack those from several fronts whether it's the Wild 100s in Milwaukee to those ‘The Firm' down here in Kenosha,\" Botsch said.

Patrick Juliana is the alderman for the 7th district in Kenosha. He said some of the suspects were caught in his district. Juliana was in the audience during the news conference.

“Unfortunately a lot of these drug dealings and gang activity were actually hurting some of the good residents and tenants within the area,” Juliana said. “I just hope that they continue moving forward in addressing these issues.”

Authorities said this is an open investigation and they encourage anyone who see suspicious activity to report it to police.

Suspects who were federally indicted: