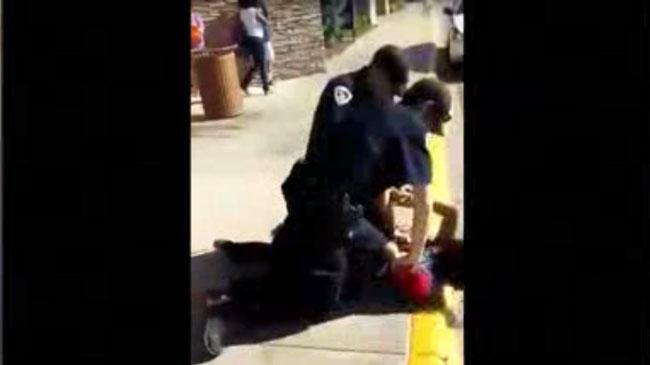 (CHANNEL 3000) Madison police Chief Mike Koval responded to the controversy caused by  the officers involved in an arrest on Madison’s east side Tuesday evening. A bystander’s video of the arrest went viral shortly after the incident.

The video shows officers hitting an 18-year-old and using an electronic control device on the woman who police say was resisting arrest.

At a news conference Wednesday afternoon, Koval said officers had responded to a report of a woman who “was out of control,” that the woman was alarming people, making threats and displayed a weapon. Koval said that gave probable cause to arrest Genele H. Laird.

Police arrived at the mall at 5:15 p.m. and found Laird agitated and animated, according to a report. Laird was upset about her phone being stolen. A bystander’s video provided to News 3 showed officers on top of Laird trying to handcuff her. Another officer kneed Laird her in the side multiple times and struck her at least once in the side with a closed fist. It appeared the officer used a Taser multiple times.

Koval said Laird was non-compliant, threatened to bite officers, and that she did scratch and kick them. She allegedly also spat in an officer’s face.

Koval addressed the video, saying it only shows a portion of what happened. He said that it doesn’t provide context for anything that happened inside the mall before officers moved the situation out of the doors. He said the first priorities of police are community and officer safety, and said Laird’s threats and knife made it a volatile situation leading to extraction from the building and arrest. Police said officers recovered a knife in Laird’s possession.

Police also addressed the hood that was placed over Laird’s face at one point in the video, saying it’s a hood made of breathable material designed to prevent subjects from spitting on officers.

Koval said that given the high-profile nature of the incident, the Dane County Sheriff’s Office will oversee an investigation and review of the incident.

The names of the officers in the incident were not released Wednesday because the officers were on leave, one of them ordered off the job for at least three days due to back spasms, and the 911 center had received threats against the officers’ lives.

The two officers were taken to the hospital for their injuries, treated and released.

Laird faces tentative charges of disorderly conduct while armed with a knife, resisting police causing injury, battery to a police officer and discharge of bodily fluid. The Dane County Jail said it did not have a booking photo of Laird Wednesday.