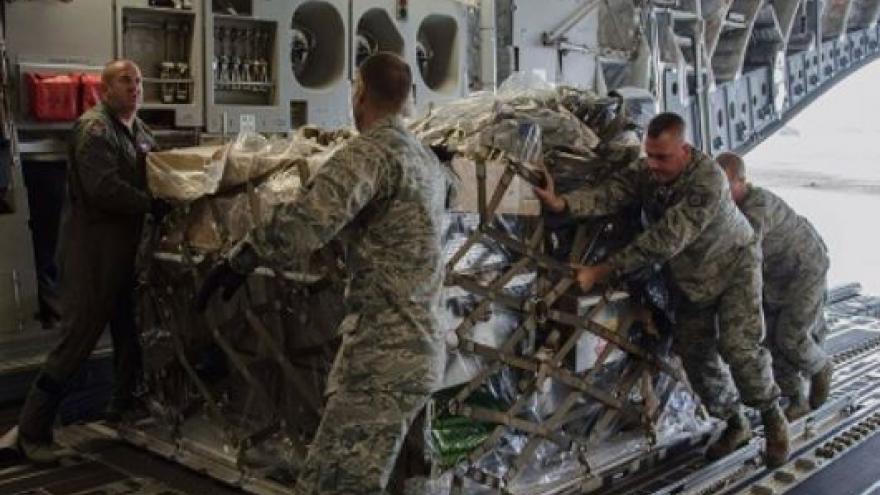 PUERTO RICO (CBS 58) -- A mobile kitchen and 16 Airmen from the Wisconsin Air National Guard are on their way to Puerto Rico to lend support in the wake of Hurricanes Irma and Maria, which impacted the U.S. in recent weeks.

Both the 115th Fighter Wing, based in Madison, Wisconsin, and the 128th Air Refueling Wing in Milwaukee sent personnel to operate the Wisconsin Air National Guard's Disaster Relief Mobile Kitchen Trailer (DRMKT) to support the response in Puerto Rico.

The DRMKT has been on active duty and at the ready since it received an initial request to support relief operations in Florida September 14 in the wake of Hurricane Irma. After it became clear that Hurricane Maria would have a major impact on the U.S. Virgin Islands and Puerto Rico, the troops were reassigned to support Maria relief operations instead.

The team departed Milwaukee September 29 en route to South Carolina where they remain staged and awaiting transport to Puerto Rico. Complicating those efforts is the fact that there are only a couple of operational airstrips on the island with capacities for a limited number of aircraft to land and unload. Meanwhile, a massive amount of federal resources, personnel, supplies and equipment are all flowing through these airstrips, creating a backlog of resources awaiting transport to the island.

Since day one, the team of Wisconsin National Guard Airmen have remained ready, but flexible to meet the emerging needs on the ground.

"Within one hour of notification, 95 percent of our Services troops responded and we were able to fulfill the tasking to assist with the hurricane efforts," Senior Master Sgt. Richard Breister, 115th Fighter Wing Service superintendent and one the DRMKT responders, said. "This type of response shows the true dedication of these Airmen and their willingness to serve, especially since six of the eight volunteers for this mission recently returned from a six-month overseas deployment."

The same was true for the Airmen of the 128th Air Refueling Wing, according to Chief Master Sgt. Jayson Colvin, the 128th's Force Support Squadron chief.

"When the request came in, I had no doubt we would be able to support it," Colvin said. "Our Airmen are equipped, trained and have a level of unmatched commitment."

Master Sgt. Kimberly Hahn, 115th Fighter Wing Services assistant manager, explained that over the past week Airmen have been preparing for the deployment by assembling the kitchen units and gathering the necessary mobility equipment needed to deploy. Services personnel are fully trained in field feeding, and each year they attend training that focuses on contingency operations in conditions similar to what they expect to find in Puerto Rico.

Nine Airmen from the 115th Fighter Wing and seven Airmen from the 128th Air Refueling Wing left Wisconsin Sept. 29 for the ever-important mission of providing hot meals to victims and first responders located in Puerto Rico. These 16 Airmen are trained in a military career field called Services, which includes specialties such as food service, fitness and recreation and lodging services. The individuals are trained to work out of a DRMKT, a free-standing mobile kitchen designed to feed up to 1,000 people in less than 90 minutes, in what is expected to be austere conditions.

"It's another tremendous example of the Wisconsin Air National Guard coming together for a common mission and pulling the team together to get that particular job done," Brig. Gen. Gary Ebben, the deputy adjutant general for Air said when asked about the collaboration between the 115th and 128th.

The teams could be gone as long as 45 days with the possibility of extending, but they are prepared to stay as long as needed fulfilling their role as the nation's first military responder in times of emergency.