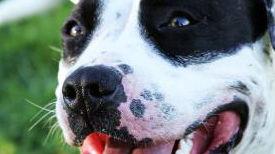 Milwaukee Area Domestic Animal Control Commission adopted out more than 1,000 animals in 2014. In December alone, 203 animals found their forever homes thanks in part to the special adoption event "Home for the Holidays" in which adoption fees were waived for all MADACC animals.

MADACC credits grants received by the ASPCA, Friends of MADACC, and private donors who helped subsidized the adoption costs along with the hard work and dedication of their staff and volunteers for getting so many more animals into their forever homes.