Louisiana Under State of Emergency after Tornadoes 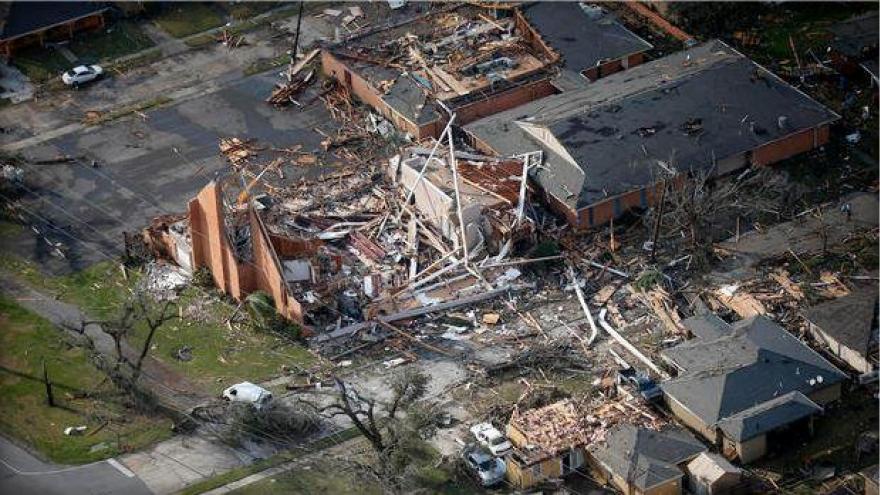 (CBSNews) Destructive tornadoes left a trail of devastation in the South. Louisiana is under a state of emergency after a series of tornadoes smashed homes and businesses Tuesday in the southeastern part of the state.

Thousands lost power. Some of the worst damage was in the New Orleans area, including neighborhoods hit hard by Hurricane Katrina. Dozens of people in Louisiana were hurt, some seriously. Local and state officials are asking people to stay away, reports CBS News correspondent David Begnaud.

As nearly half a dozen powerful twisters barreled through Southeast Louisiana, people recorded the destruction as it unfolded.

Debris filled the air, and dangerous winds flipped and pushed what appears to be a trailer through a mall parking lot.

Surveillance footage shows the roof of a business blowing off and smashing into parked cars. In the background, an 18-wheeler is flipped on its side.

A tornado that was at least an EF2, with winds up to 135 miles per hour, destroyed homes and knocked out power to thousands of people in the New Orleans area. A NASA assembly facility was also damaged in the storm.

“It went about two miles,” said New Orleans Mayor Mitch Landrieu. “It affected about an area that holds 5,000 properties.”

“It’s like an elephant stomping on your house,” Landrieu said.

Sheryl McBride’s house collapsed around her as she took cover in the bathtub.

“As soon as I sat down, the roof went up,” McBride said.

“Look at this, look at what would’ve fallen on you had you not gone in the tub,” said Begnaud, surrounded by the ruins from her home.

Edwards praised the efficient response. It’s a grim reminder of past tragedies the state’s endured.

“We get too much practice but it’s a good thing when we’re called upon that we’re able to do it,” Edwards said.

“This neighborhood flooded during Hurricane Katrina. I wonder what’s more devastating for you -- a flood or tornado?” Begnaud asked.

“A tornado, a tornado,” McBride said with no hesitation. “You have no warning. With a flood, you know it’s coming. You have time to prepare and to evacuate. I had time to do nothing.”