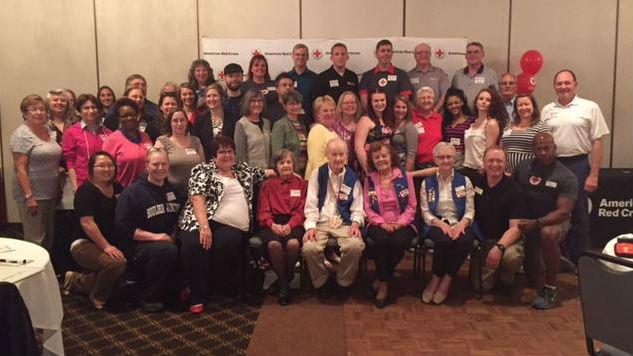 The American Red Cross of Southeast Wisconsin honored volunteers at American Serb Hall. With 110 in attendance, volunteers and a guest were treated to a meal, prizes and an evening of bowling. Every day, local volunteers are working often behind-the-scenes to alleviate human suffering in the face of emergencies. The crowd was brought to the feet upon hearing the amazing acts of volunteerism and collaboration from Chapter Executive, Patty Flowers, who shared her appreciation for all that volunteers do and highlighted many recent volunteer milestones and accomplishments, according to a press release from ARC.

The program kicked-off by Volunteer Program Specialist, Alex Lombard, who expressed appreciation for all who give of their time, talent and treasure to help the Red Cross fulfill their mission. Years of service pins were presented along with several individual achievement awards for which volunteers were nominated by their peers:

Jay Ostema of Milwaukee, WI received the New Volunteer of the Year Award.  This award is given to a new volunteer who demonstrates exceptional motivation and potential to serve their community through the organization. He received the award based on his quick willingness to rise as leader within local Disaster Service operations. During a shelter operation in Kenosha earlier this year, Jay put his strategic planning skills to the test by leading the sheltering & feeding team.

Rose Chepeck, of Milwaukee, WI earned the Exceptional Leadership Award given to an individual that demonstrates exceptional guidance and support for other volunteers, staff or clients. In her 20th year of service to the Red Cross, she was selected for her tireless work representing and leading a team of volunteers at the Clement J. Zablocki VA Medical Center. In particular, Rose and her team, serve as recreational therapy assistants every Wednesday for veterans living in long-term care. Thanks to Rose, veterans are excited to leave their rooms to see what creative entertainment she has planned and certainly, no birthday is forgotten.

Melody Stevenson of West Allis, WI received the Outstanding Outreach Award. Her work strengthened our communities through initiative and drive by making sure our mission is shared and supported by partners in every community. Her amazing work with leading the disaster dispatchers, who take calls 24-hours a day from emergency personnel seeking our assistance, has been invaluable. During the shelter operation in Kenosha, Melody ensured community partners were aware of our support and invited them to participate in the Multi-Agency Resource Center where fire victims could gather resources all in one location.

Susie Ropiak of Port Washington, WI is this year’s Unsung Hero Award recipient. This award is given to a volunteer whose service may often go unnoticed, but serves as an invaluable foundation for making our mission possible. Susie serves as the Orientation lead for the First Aid Service Team. Often driving from Port Washington to Milwaukee 2-3 times per week to meet with new volunteers, she ensured no new member of our team go without the resources they need to begin serving.

Bobbi Holiday of West Bend, WI received the Above and Beyond Award. Based on exceptional willingness to “continually step-up” when the Red Cross and their community needed them. Bobbi is well-known for her calm demeanor and willingness to serve the Red Cross however she may be asked. Often volunteering as an ambassador of the Red Cross in Washington County, over the past year she has been involved with fundraising, administrative support, blood drives and disaster relief.

The Red Cross is a volunteer organization lead by a local board of directors with more 90% of the workforce comprised of volunteers across several lines of service. Each fiscal year, more than 2,700 registered volunteers across Wisconsin donated their time to support initiatives such as: