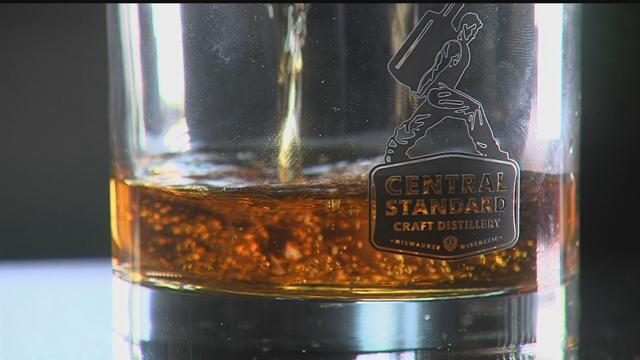 Pat McQuillan enjoys the taste of success, especially when it's taken perseverance and patience to get there.

"We just wanted a place the community can come and gather," he said.

And, have a drink or two. There's gin, vodka, oat whiskey, and now, bourbon whiskey. The company released its first batch of bourbon Thursday night.

"It actually sold out in 20 minutes," said McQuillan. "This is why we started the company because we really love bourbon."

From the grain to the glass, it's all hand-crafted, and every bourbon label has a batch and bottle number.

McQuillan said craft to distilleries have been around for 10 years in Milwaukee and the industry as a whole is taking notice.

"As you have seen recently with mergers in larger companies because of the craft movement that's happened," he said.

It's a movement that will boost the local economy.
Central Standard is teaming up with neighboring businesses like Anodyne Coffee for some new creations, like coffee vodka.

"This is a product that will be ready for sale to the public next month," McQuillan said. "It's a whole bean process. We use their Ethiopian beans and our vodka."

Until there are more bottles of bourbon whiskey for sale, you can stop by Central Standard Craft Distillery for samples.

They don't serve food there, so feel free to bring your own. It's located at 613 South 2nd Street, next to Milwaukee Brewing Co.