Life is sweet for Amazing Race winners from Madison 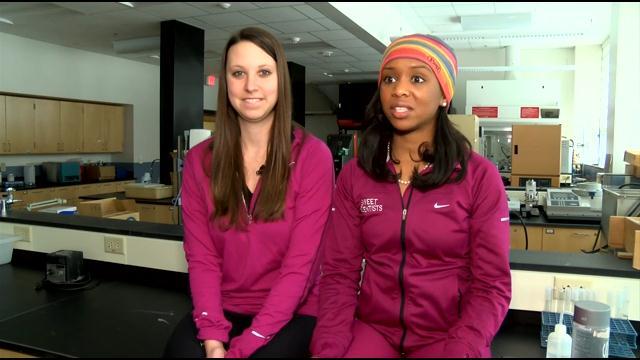 Known on the CBS reality show \"The Amazing Race\" as the \"sweet scientists,\" Amy DeJong and Maya Warren are focused on their research in a UW-Madison lab, but are still relishing their come-from-behind win. \"We had so much fun, excited to bring the victory to Wisconsin,\" DeJong said.

The pair had known they claimed victory for months, but were sworn to secrecy until the Season 25 final aired last December. Since the big victory, how has life changed? Not much, according to Warren. \"When I wake up in the morning, I don't think about the Amazing Race, I don't think about winning, I think about my research,\" she said.

Both DeJong and Warren are Ph.D. students in food science at UW-Madison, who specialize in researching candy and ice cream. That fact may have helped Amazing Race competitors underestimate them. \"They called us 'the candy girls' instead of Ph.D. students,\" DeJong said.

Turns out it was a bad idea for Amazing Race opponents to overlook them. They say one of the best parts about winning was inspiring other women. \"Other female scientists have emailed us to say thank you for finally showing the world that we are a force to be reckoned with. I mean we can have fun, we aren't the nerdy awkward people that are always in the media,\" DeJong said.

Warren says she still gets recognized in grocery stores, and still doesn't know just how to react. \"I'm like, 'how do you know me?' but then I'm like, 'oh yeah, I was on the Amazing Race, you do know me!'\" she said.

Both Warren and DeJong now use their celebrity to help recruit for the Badgers. As for the $1-million dollar winning prize, both put their share into savings, but both say the joy they felt from the experience was never about the money. \"It was one of those things where we were underestimated but we new what we were capable of and we had fun,\" DeJong said.

\"I hope we inspired you to go out and do something random, like we did,\"Warren said.

DeJong has a few years left in her pursuit of a doctorate degree. Warren is scheduled to earn her Ph.D. later this year.