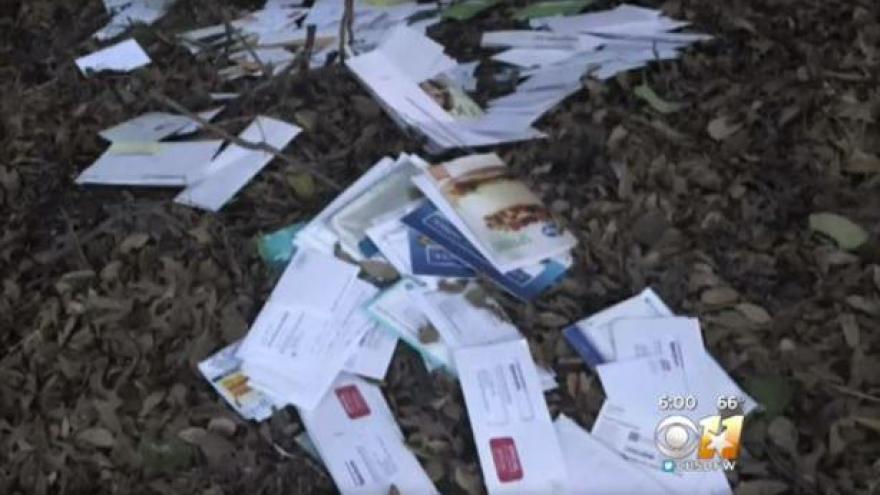 (CBSNews) - A Dallas letter carrier has been accused of dumping mail into a wooded area, CBS Dallas / Fort Worth reports.

“It was dumped right through here, all the way down to the bottom,” said Don Sutton, who lives across the street and found the mail.

Sutton said he went to pick up what he thought was trash across from his house. A closer look revealed what someone dumped.

“There was a lot of mail,” he said. “It didn’t just fall, it stuck together.”

Sutton said he called the police Monday night, but the mail was still there early Tuesday morning. He took photos of postal inspectors collecting the mail after sunrise.

Before he found the mail, Sutton says he watched a mail truck that parked across the street on his surveillance camera. He gave the postal service investigators a copy of his surveillance video.

A spokesman with the postal service’s Inspector General’s office said hours later that they identified the letter carrier responsible, and that the employee no longer works there.

Sutton said some of the letters he discovered were addressed to residents on Perryton Drive, about three miles away.

“I don’t want to miss something important, important mail. I hope it doesn’t happen again,” said Tom Collins who lives near the site where the mail was tossed.

Investigators said they were processing the dozens of letters that were found, and then the postal service would be delivering them and contacting victims about what happened.

There’s no word if the letter carrier will face criminal charges or why he or she dumped the mail.

“I feel he just couldn’t get it done and he just dumped it,” said Sutton.