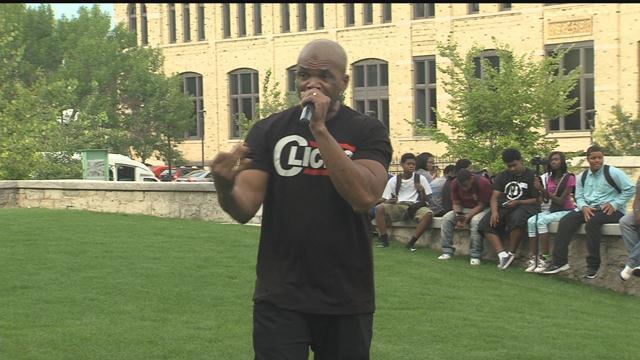 Many may not know who he is, but that's okay for Darryl McDaniels.

"I haven't heard of him, but I've heard of his group," said student Eryn Weaver.

McDaniels is more widely known by another name, DMC.

"I am the DMC from the rap group Run-DMC," he told the young crowd.

The legendary rapper said Monday he's not in Milwaukee because of what he's done, but what these young people are about to do.

"This is about touching these kids on the inside and let's them know whatever gifts and talents they have, that can be accelerated if they get an education," he said.

The Milwaukee Bucks teamed up with McDaniels for the 5th Annual Jam Master Jay Back-to-School Bash.

About 300 students earned the right to attend by doing community service, job training or academic enrichment over the summer through five organizations. They are the Running Rebels, Operation Dream, Journey House, The Dominican Center and City on a Hill.

Students filled new backpacks with school supplies and picked up a new pair of Adidas, courtesy of Clicks shoe store, which McDaniels co-owns in Milwaukee.

Kids also got a free haircut or style. Gaulien Smith of Gee's Clippers said confidence is the start to success.

"We do our part to encourage kids to do their best," said Smith. "They can't do anything about yesterday, but they can do everything about today and make tomorrow different."

"It means a lot to me," said parent Alice Spears. "It shows my children I'm concerned about their education that I want them to have the tools they need to get their grades up."

McDaniels has for these kids to be doctors, lawyers and CEOs and he said it can be achieved through their own "DMC."

"Determination, motivation and concentration," he said.

McDaniels started the event five years ago as a way to honor the positive attitude of his DJ, Jam Master Jay, who was killed in 2002. He said Milwaukee was one of Jay's favorite places to visit.