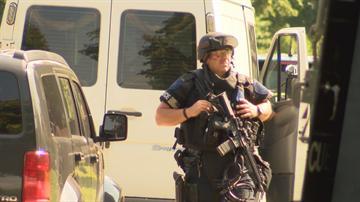 \"We don't know when and where bad things are going to happen,\" Kenosha County Sheriff's Sergeant Bill Beth said.  \"We just have to be prepared.\"

They're not every-day equipment, but tools police in southeastern Wisconsin say they need on hand.

\"Our armored car rolls out probably a couple times a month,\" Beth said.

Kenosha County Sheriff's Department has obtained plenty of leftover military equipment over the years.  Boats from the Coast Guard, a six-wheel all-terrain gator, dozens of rifles and even a Huey helicopter are at their disposal.

\"Citizens might think it's a militarization,\" Beth said.  \"I also see that citizens expect us to control situations and be able to respond to situations.\"

Wisconsin agencies can apply for military gear online through the Wisconsin 1033 program, most at a fraction of, or no cost at all.

\"We would have them whether we acquired them through the military or not, so it's really just a  benefit to take what taxpayers have spent their money on and re-appropriate it to a different  agency,\" Beth said.

\"Everything is a balance,\" Milwaukee Police Chief Ed Flynn said.  \"The use of force is a serious thing.\"

Chief Flynn says his department has similar gear, but he hasn't applied for any surplus military equipment during his tenure.

\"One of the things we really practice in our crowd-control efforts is the lightest possible  footprint,\" Flynn said.  \"I know, optically, military equipment can look bad.\"

That's why both Flynn and Beth say their agencies only call out this equipment in \"high risk\" situations.