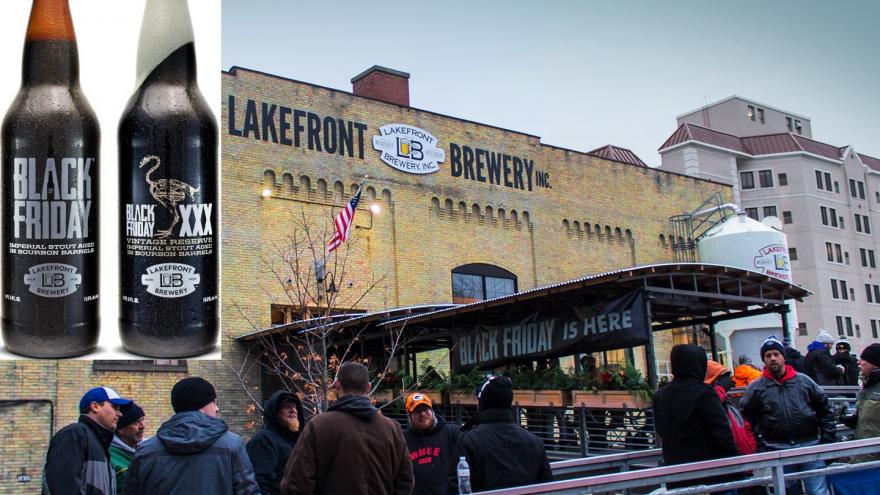 Lakefront Brewery’s doors will open at 8 a.m. Thousands are expected to walk through and many will begin lining up outside the 1872 N. Commerce brewery as early as 3:30 a.m.

“This is our sixth year doing Black Friday and it’s become more than just a rare beer release,” said Chris Johnson, director of business development, Lakefront Brewery.” “People really wait and plan all year so that when family and friends come in town, they can get together at a place more invigorating than a shopping center.”

Customers can purchase up to three 22-oz bottles of the 2017 Black Friday for $15 each, and one bottle of the Black Friday Vintage Reserve, which features a silver wax crown seal and a turkey skeleton graphic silkscreened in sterling silver, for $25. A combo four-pack will be on sale for $70 while supplies last.

“The Black Friday was brewed at the beginning of the year, then aged in bourbon barrels for 10 months, where it picks up the vanilla and oak notes that seriously complement the beer’s big, chocolatey, roasted malt flavors,” said Michael Stodola, brand manager, Lakefront Brewery. “The Vintage Reserve has been aging for years and the flavor has become smoother, but the alcohol has grown.”

In addition to the special beers and Black Friday gear, Lakefront Brewery’s Beer Hall will serve breakfast fare starting at 5 a.m. outside.