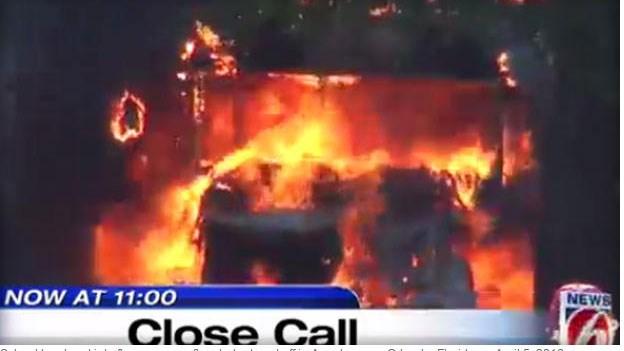 APOPKA, Fla. (CBS NEWS) -- An Orlando area school bus driver is being praised by grateful parents after getting students off his bus moments before it burst into flames Tuesday.

Doug Alexander was one of them.

"All of a sudden, ka-boom, there was one explosion and then a few minutes later, another explosion," Alexander said.

He said he saw the driver running away from the bus just minutes before it exploded.

The transfer happened in the nick of time: Moments after the kids were put onto another bus to make it home, the bus went up in flames.

"Once you see those flames, it's like, 'Oh man, that thing is going to blow up,"' Alexander said.

Sean Rogers said the bus was full of kids including, his 14-year-old daughter. He went to pick her up and started shooting his own video.

"The kids that were on the bus with her, they got transferred to the other bus before it caught on fire, so she was one of the only few that actually got to see it go up in flames and catch some of the explosions," Rogers said.

Fortunately, no one was hurt. Everyone got off the school bus just in time.

Rodgers said he has a message for the driver.

"I would tell him thank you very much for saving all those children's lives," he said.

Detectives said it's still unclear what caused the bus to explode.